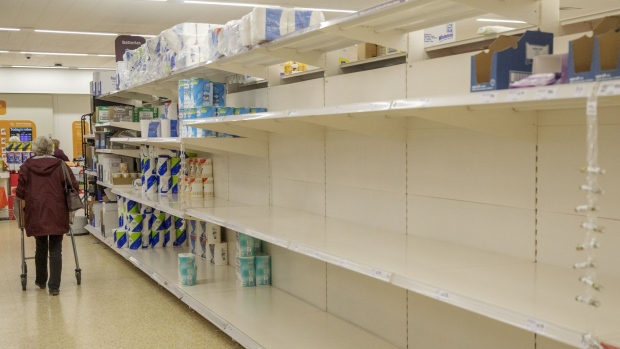 Canadian consumer confidence posted its biggest ever weekly drop as the coronavirus crisis shuts much of the nation’s economy.

The Bloomberg Nanos Canadian Confidence Index, a composite gauge based on telephone surveys of households, declined sharply for a second week, sinking to the lowest level since the Great Recession more than a decade ago. The plunge coincides with the start of extensive nationwide lockdowns that have triggered mass layoffs.

The deterioration highlights how abruptly the economy has seized up; almost one million Canadians applied for jobless claims since the start of the lockdown, according to the latest data. At the same time, there are signs that efforts by policy makers to mitigate the impact with new spending and stimulus are working -- the sharp decline in sentiment is largely driven by worsening expectations about the outlook for growth rather than concerns about personal finances.

The aggregate index number dropped to 46.9 last week, down from 51.3 a week earlier and 54.3 two weeks ago. Last week’s decline is the largest since Nanos began weekly tracking for the index in May 2013. Before then, the telephone poll was done monthly.

Canadians’ outlook for the nation’s economy is the bleakest on record, with almost two-thirds of respondents now expecting Canadian output to be weaker six months from now. That’s more than double the historical average for that question. Only 8.3 per cent of respondents see the economy strengthening, also a record low.

The numbers point to fragility in the country’s housing markets, with 27 per cent of respondents now expecting real estate prices to decrease in the next half year, the highest proportion since the 2008-2009 financial crisis.

Canadians aren’t feeling great about their personal finances, but this gauge isn’t collapsing like it has been for housing price expectations and the economic outlook. The share of Canadians who say their finances are worse off has increased to 29 per cent, up slightly in recent weeks but still only three percentage points above historical averages. The percentage of respondents who say they are better off is at 17.7 per cent, little changed from recent weeks.

The relative steadiness in personal finance perceptions may reflect massive fiscal package announced over the past two weeks that now totals more than $200 billion, along with interest rate cuts by the Bank of Canada.

Another positive in the data is that perceptions of job security haven’t nosedived, even with the massive jump in jobless claims. About 13 per cent of respondents are worried about their job security, a pickup of a couple of percentage points over the past two weeks and above historical averages but still well below records.