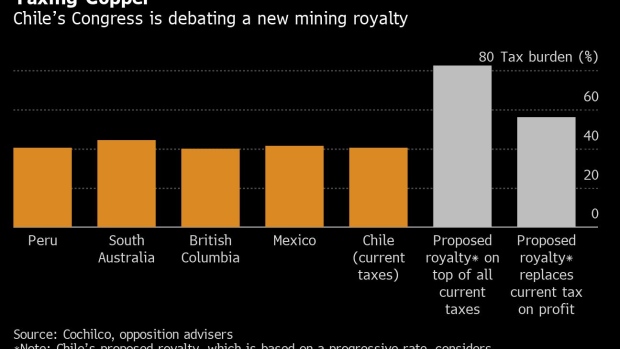 (Bloomberg) -- A bill that would create the heaviest tax burden among major copper-producing nations was approved in an initial vote in Chile’s senate on Tuesday.

Senators voted 18 to 16 in favor of the main text of the proposal. It now goes back to committee, where members are likely to seek modifications to temper its impact. Amendments would then go back to another floor vote.

Politicians in the top copper-producing nation are looking for a bigger share of mining profits to help resolve inequalities exacerbated by the pandemic. Chile has been drafting a new constitution that may lead to tougher rules on mineral and community rights at a time when voters are moving away from mainstream parties ahead of presidential elections.

While the opposition-backed bill easily passed through the lower house in May, a steady drumbeat of warnings from the center-right ruling coalition and industry representatives has given some lawmakers pause. Companies including BHP Group say the bill as it stands -- with sales tax brackets that increase as metal prices rise -- would derail investments in a nation that accounts for more than a quarter of global copper. That could make the difficult task of meeting rising demand even harder.

Debate surrounding the bill is caught up in the shifting political winds in the country. Left-leaning parties are questioning the investor-friendly rules that made Chile one of the richest nations in the region, while those on the right fear a development-stalling loss of competitiveness.

Adding to the tensions is uncertainty over how the new royalty would fit alongside existing taxes. While proponents say it would replace current levies on profit, that isn’t written into the bill, leading government officials to suggest the two systems could run together, creating a total tax burden of 80%.

The bulk of large mining companies in Chile have tax stability agreements until 2023. Given the bill was presented by opposition groups, the government could also seek to block it via the constitutional court.