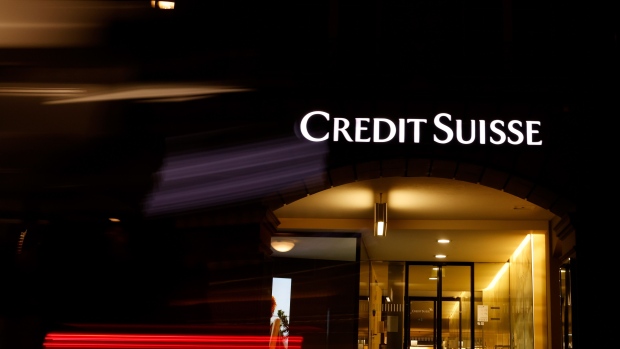 A Credit Suisse Group AG bank branch in Bern, Switzerland, on Sunday, Nov. 27, 2022. Credit Suisse clients pulled as much as 84 billion Swiss francs ($88.3 billion) of their money from the bank during the first few weeks of the quarter, underlining ongoing concerns over the bank’s restructuring efforts after years of scandals. Photographer: Stefan Wermuth/Bloomberg , Bloomberg

(Bloomberg) -- Credit Suisse Group AG shares surged as much as 10% on Friday after Chairman Axel Lehmann said the bank’s liquidity was improving and the huge outflows of client assets that had spooked markets were coming to an end.

Withdrawals at the Swiss lender, which surged to about 84 billion francs ($90 billion) earlier this quarter after rumors about the bank’s stability, have “basically stopped,” Lehmann said in a Bloomberg Television interview with Francine Lacqua. The bulk of the bleeding occurred in October, and the bank has since seen some assets come back in Switzerland.

“When I speak to clients, I already know that there are going to be inflows,” Lehmann said. “We already see it partially happening. So we have plans to continue to reach out to clients. It might take a bit of time but it will come back and we will go back to normal.”

Credit Suisse rose as much as 10.2% in Zurich trading, putting the stock on course to end a record 13-day losing streak, as the comments calmed investors. The bank had shocked markets late last month when it said clients in a matter of weeks had pulled about 10% of assets at the key wealth management unit, which is traditionally one of the bank’s most stable businesses.

The declines of the past weeks had pushed the shares near the level that the Swiss lender is pitching to investors in a crucial capital raise, a development threatened to limit the attractiveness of the offering. Credit Suisse needs funds from the rights offering to finance a major overhaul, including job cuts and the carve-out of the investment banking business. The plan has met with skepticism from analysts and investors concerned about the complexity of the restructuring.

Credit Suisse was up 7.8% at 2.91 francs as of 2:30 p.m., paring losses this year to 65%. The bank had set a price of 2.52 francs for subscription rights after outlining its turnaround plan in October.

“I think core shareholders believe us and they will exercise their rights,” Lehmann said, adding he’s in regular discussions with investors. “Of course, when you’re an investor in Credit Suisse for 20 years and you see where the share price is, these are challenging discussions.”

Investors also took comfort from comments by Lehmann that the main indicators of the bank’s financial stability were strong and that its level of liquidity was improving after declines in recent weeks. The Zurich-based bank’s liquidity coverage ratio, which measures the quantity of easily-sold assets available to meet obligations, is currently at 140%, Lehmann said.

Credit Suisse reported last week that the metric had dropped to between 120% and 130% on a spot basis, from a level of around 190% at the end of the third quarter. In October, outflows of assets and the subsequent use of liquidity buffers had caused the bank to fall below certain regulatory levels at some of its entities.

--With assistance from Jeff Black.