Consumer delinquencies on the rise in Canada

Consumer delinquencies are on the rise in Canada, with the country’s eldest falling behind on their debt at the fastest rate, according to new data from Equifax.

The report, released Tuesday, on the eve of a Bank of Canada interest rate decision, revealed delinquency rates for Canadians 65 and older were up 7.2 per cent year-over-year in the fourth quarter.

“As we expected, the worm is turning in the Canadian credit market,” said Bill Johnston, VP of data and analytics at Equifax Canada, in a release. “Bankruptcies were up 15 per cent in the last half of 2018 and the small increase in delinquency rates mask some underlying weakness.”

“Rising delinquency is likely to become the norm in 2019,” he added.

The 90-day mortgage delinquency rate rose 1.5 per cent to 0.18 per cent in the quarter and the comparable non-mortgage rate was up 0.4 per cent to 1.07 per cent following two quarters of higher consumer bankruptcy rates, the report said.

“This is everything coming home to roost now,” said Philip Petursson, chief investment strategist at Manulife Investment, in an interview with BNN Bloomberg Tuesday. “The Bank of Canada having raised rates five times, this is the impact.”

“When your overall cost of debt is starting to go higher and you can’t keep up with it, you fall into some delinquency – and I think what it means is the Bank of Canada is probably going to be on pause through 2019.”

Equifax also said average non-mortgage consumer debt rose to $23,520 in the fourth quarter, up three per cent from the same period last year. By province, Manitoba posted the highest increase in its delinquency rate at six per cent. 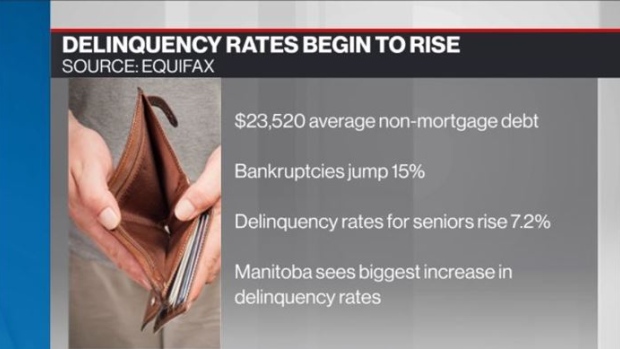