Most Canadians don’t want to give the Bank of Canada the flexibility to raise its 2 per cent inflation target, a new poll finds as Prime Minister Justin Trudeau’s government nears a decision on the central bank’s mandate.

About 56 per cent of Canadians are uncomfortable with adjusting the bank’s mandate, according to the poll, conducted by Nanos Research Group for Bloomberg News. Only a third said they were comfortable with the idea.

Major central banks are grappling with how hot they should let their economies run as they begin to recover from the COVID-19 pandemic. Annual consumer price gains in Canada hit 4.1 per cent in August, the highest since 2003, but policy makers led by Governor Tiff Macklem argue the surge is temporary. 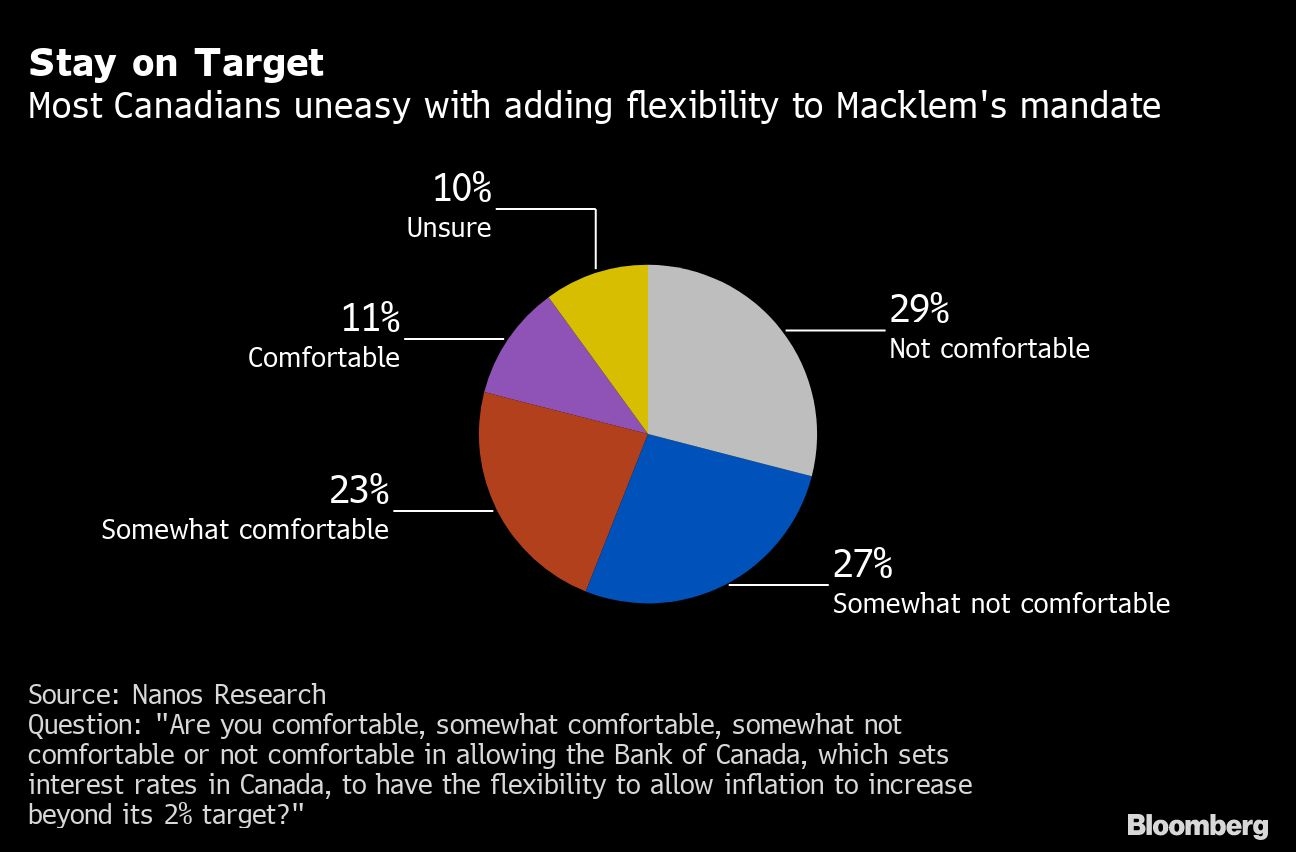 The U.S. Federal Reserve last year gave itself leeway to tolerate periods of inflation above its 2 per cent target. It adopted a policy, “flexible average inflation targeting,” with the explicit goal of having inflation run moderately above 2 per cent for a time to make up for periods below that level.

Every five years, the Bank of Canada and the federal government negotiate the monetary policy framework, a process that must be completed by the end of 2021. The bank’s current mandate targets inflation of 2 per cent, within a control range of 1 per cent to 3 per cent -- but it’s been above the upper end of that range for five consecutive months.

Signing off on the bank’s new mandate is one of the first item’s on Finance Minister Chrystia Freeland’s desk after Trudeau’s government won re-election on Sept. 20. Rising prices became a key issue during the campaign, in which the prime minister’s incumbent Liberals were held to minority control of the legislature.

The timing of the mandate renewal poses challenges to Bank of Canada officials, who are winding down emergency monetary stimulus while also facing headwinds from supply-side disruptions that threaten to curb growth. Macklem said at a press conference last week that there are “good reasons” to believe increasing price pressures will be short-lived.

The central bank will have to decide whether to tolerate the recent high inflation readings or tighten monetary policy sooner and risk slowing down growth. Markets have priced in two rate hikes from the Bank of Canada in the next year. Most economists expect the first one in the second half of 2022.

The latest Nanos survey echoes findings by a Bank of Canada report earlier this year, which indicated that most Canadians preferred the current 2 per cent inflation-targeting framework over alternatives. The bank has studied several options including moving toward a dual mandate that considers labor market metrics or average-inflation targeting in addition to inflation.

The Fed, unlike the Bank of Canada, already has a second mandate to promote maximum sustainable employment. A Bank of Canada move toward inflation averaging would resemble the Fed’s move last year.

Nanos Research conducted the survey of more than 1,000 people from Sept. 30 to Oct. 3 via telephone and online polling. It is considered accurate to within 3.1 percentage points.