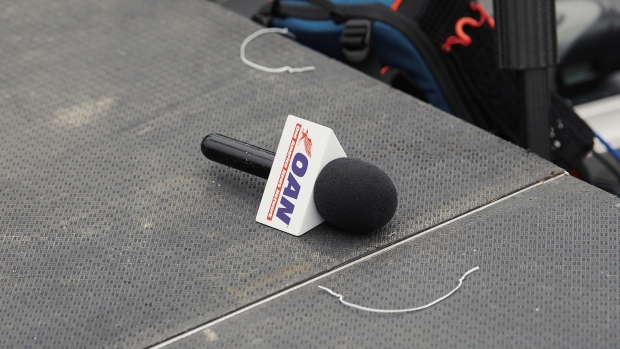 A One America News Network (OAN) microphone on the media risers during a Save America rally with former U.S. President Donald Trump at the Iowa State Fairgrounds in Des Moines, Iowa, U.S., on Saturday, Oct. 9, 2021. Trump has been hinting about another presidential bid, even as he has tried to steer clear of activities that would trigger federal election laws that would require him to register as a candidate -- and limit spending. Photographer: Dan Brouillette/Bloomberg , Bloomberg

(Bloomberg) -- The founder of One America News Network, the conservative cable outlet, called on viewers to pressure pay-TV providers to carry the channel after DirecTV decided to drop it.

In a new video, Chief Executive Officer Robert Herring Sr. said he learned about DirecTV’s decision when he read about it in the news last Friday, calling it “a major surprise.”

“We don’t know exactly what we are going to do yet,” Herring said in the video, which was posted on the website of the left-leaning group Media Matters for America. “But don’t worry, we have a lot of options.”

On Jan. 14, DirecTV, one of the largest U.S. pay-TV providers, said it plans to drop OAN, which has been criticized for spreading misinformation about the pandemic and the 2020 election. DirecTV’s decision was first reported by Bloomberg News.

The satellite-TV provider said it notified OAN’s owner, Herring Networks Inc., that it plans to stop carrying the company’s two channels when their contract expires. Herring Networks also owns AWE, a lifestyle channel that stands for “A Wealth of Entertainment.”

DirecTV’s contract with Herring Networks expires in early April, according to a person familiar with the matter.

Herring urged viewers to reach out to the cable-TV providers in their area -- including Charter Communications Inc., known as Spectrum, and Dish Network Corp. -- and “let them know that you would like for them to carry One America News.”

“We only charge 10 cents per household per month,” Herring said. He called that a bargain “given all of the amazing content our team puts out.”

OAN relied heavily on revenue from millions of DirecTV customers paying for it, whether they watched its programming or not. In 2020, an OAN lawyer said in court that if the channel’s DirecTV contract ended, “the company would go out of business tomorrow,” Reuters has reported.

The channel is still carried on Verizon Fios and smaller pay-TV providers, according to its website. Verizon didn’t respond to a request for comment about whether it will continue to carry OAN.

DirecTV’s decision has been met with praise by left-leaning groups who have pushed for pay-TV providers to stop giving a platform to the channel. It was also met with derision by right-leaning politicians. Rand Paul, a Republican senator from Kentucky, said he canceled his DirecTV subscription, while former President Donald Trump suggested at a rally that his supporters boycott AT&T.

DirecTV is owned by AT&T and TPG through a joint venture.

The service has offered OAN to customers since April 2017 after Herring Networks won a lawsuit that forced the satellite-TV provider to carry the channels.

Ball told OAN viewers to call AT&T’s customer support line to “demand they keep OAN” and asked viewers for “any dirt” on Kennard.