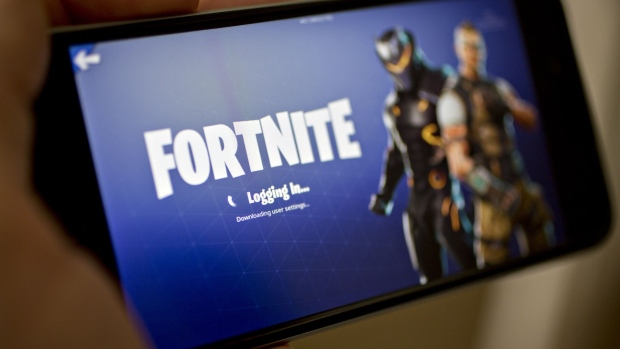 The Epic Games Inc. Fortnite: Battle Royale video game is displayed for a photograph on an Apple Inc. iPhone in Washington, D.C., U.S., on Thursday, May 10, 2018. , Andrew Harrer/Bloomberg

Epic Games Inc. widened its dispute with Apple Inc. over access to its popular Fortnite video game as it submitted a complaint to the U.K.’s antitrust tribunal.

The company said Apple’s decision to remove the game from the iPhone maker’s App Store was unlawful. The move came after the games maker sought to offer in-app purchases without using Apple’s digital payments service. The complaint, alongside a similar one against Alphabet Inc.’s Google, was made public by the Competition Appeal Tribunal Thursday.

Apple has abused its “dominant position,” Epic said, according to the filing. “This is an important argument to make on behalf of consumers and developers in the U.K. and around the world who are impacted by Apple and Google’s misuse of market power,” Epic said in a follow-up statement. “Epic is not seeking damages from Apple or Google in the U.K., Australia or the U.S., it is simply seeking fair access and competition that will benefit all consumers.” Apple didn’t respond to a request for comment.

This is the latest step by the company to get Apple to reinstate the battle royale video game in the British App Store. Epic offered a payment system that circumvented the App Store, meaning Apple didn’t get a cut.

--With assistance from Mark Gurman and Olga Kharif.