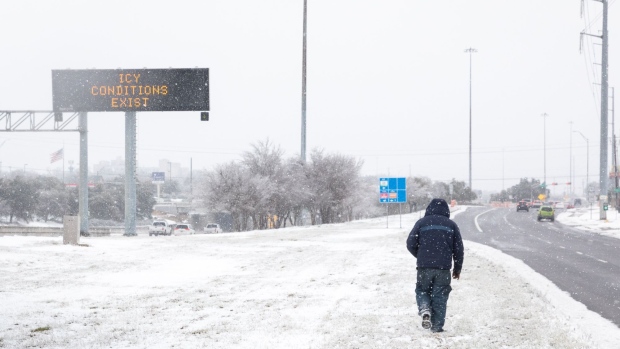 A pedestrian walks past a road sign warning commuters of icy conditions on a road in Austin, Texas, U.S., on Thursday, Feb. 18, 2021. Texas is restricting the flow of natural gas across state lines in an extraordinary move that some are calling a violation of the U.S. Constitution’s commerce clause. Photographer: Thomas Ryan Allison/Bloomberg , Bloomberg

Exelon Corp. expects its first-quarter net income will be reduced by US$560 million to US$710 million because of last week’s cold blast in Texas, saying three of its power plants were forced to shut down.

The utility owner cited periodic outages beginning Feb. 15 at three of its natural-gas plants in Texas in a statement Wednesday. Exelon said the losses would be offset by US$410 million to US$490 million in deferred maintenance costs, one-time savings and additional revenue opportunities.

“This loss is unacceptable to us,” Exelon Chief Executive Officer Christopher Crane said on a call with analysts.

The three plants were “periodically available” when power prices reached the market cap of US$9,000 a megawatt hour, and the estimated loss is still preliminary, Crane said

“It includes our best estimate for load obligations, ancillary charges and bad debt,” he said. The company expects to issue additional guidance by the time it releases its first-quarter earnings.

The historic outage caused billions in economic losses, and the impact to individual companies is just starting to emerge. At its peak, more than 4 million Texas homes and businesses were without power over several days of unprecedented cold.