The time has come for Canadian index investors to say goodbye to Encana Corp., a stalwart of the nation’s energy sector with roots going back to the late 1800s.

On Friday, shares of the oil and gas company will be removed from the S&P/TSX Composite and S&P/TSX 60 indexes after it won investor approval to relocate to the U.S. and rebrand under the name Ovintiv. While Encana will leave a hole on the key stock gauge, Brookfield Property Partners LP will replace it on the large-cap index, according to a statement from S&P Dow Jones Indices.

“This could possibly be the largest index event for the Canadian market,” Bryan Chuah, an analyst at Canadian Imperial Bank of Commerce, said in a report. About 195 million Encana shares will need to be sold by Canadian indexers — valued at about $1.1. billion, he said, as its new U.S. domicile makes it ineligible for inclusion up north. Encana has about 1.3 billion shares outstanding, according to data compiled by Bloomberg.

Encana shares have been in a downward spiral for more than a decade. In 2009, the company spun out its oil-sands assets into Cenovus Energy Inc. in a bid to unlock shareholder value and focus on natural gas. That didn’t work so well, as a glut of North American gas production has weighed on prices ever since. 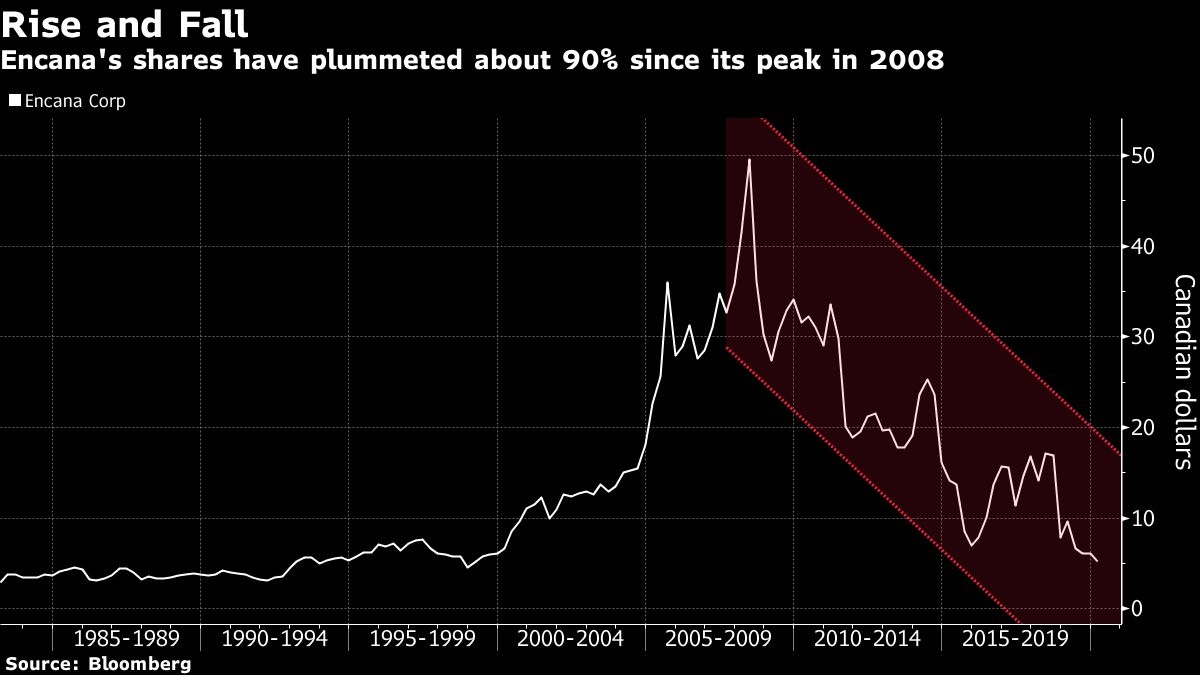 Chief Executive Officer Doug Suttles, who took the reins in 2013, shifted the company away from gas production and into shale oil, especially in Texas’s Permian Basin. Its market value has tumbled about $63 billion to $6.7 billion since its 2008 peak.

Units of Brookfield Property, a global real estate company, have rallied almost 10 per cent this year to market value of $25.8 billion. Prior to this addition, the S&P/TSX 60 had zero representation in the real estate sector.

Encana announced last year that it will move its head office from Calgary to Denver to allow access to larger pools of investment capital, including U.S. index funds and passively managed accounts.

The company may be added to the S&P MidCap 400 Index in the U.S., generating demand for 90 million or more of the company’s shares, Randy Ollenberger, an analyst at Bank of Montreal, said in a note last week.

Encana’s move south only intensified the gloom enveloping the Canadian energy industry after foreign companies sold more than $30 billion of assets in the past three years amid a lack of pipeline space that has choked off prospects for growth.

Encana joins pipeline owner TransCanada Corp., which changed its name to TC Energy Corp. earlier this year, in dropping the link to Canada from its name.

Encana traces its history to the 1880s, when the Canadian Pacific Railway Ltd. accidentally discovered natural gas while drilling a water well for workers. The company was eventually spun out from Canadian Pacific and took the name EnCana in 2002.

--With assistance from Aoyon Ashraf.