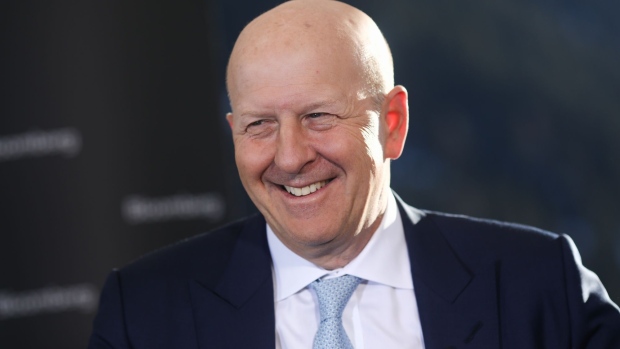 (Bloomberg) -- Goldman Sachs Group Inc. Chief Executive Officer David Solomon is tied with Morgan Stanley’s James Gorman for the title of the best-paid CEO at a major U.S. bank after receiving $35 million for 2021.

Solomon, 60, will receive $12 million in cash and the rest in stock awards, the New York-based firm said Friday in a regulatory filing. That’s double his payout from a year ago, when the board had reduced his package to $17.5 million after requiring him to return a third of his pay as penalty for the bank’s role in an international bribery scandal.

Wall Street had an extraordinary year in which banks rode the pandemic to record profits. That’s paved the way for the kind of bulging pay-packets not seen in more than a decade at the biggest firms.

Goldman’s largess for its bankers and traders has been visible in its results that showed a 33% increase in compensation costs, mirroring a similar increase in revenue.

That hasn’t been met with much enthusiasm from shareholders. Goldman shares are down 9.3% this year, the worst performer among its peers. The stock has now slumped about 19% from its November high to $347.01.

The board’s willingness to reward the Wall Street titan’s leader comes on the back of stinging action a year ago, when it docked $10 million from Solomon’s 2020 pay. That was meant as a measure of accountability for the firm’s criminal role in the looting of Malaysian investment fund 1MDB.

The board then granted Solomon and Chief Operating Officer John Waldron an off-cycle bonus. That award, announced in October, could be worth more than $75 million if the share price meets certain targets.

The bank’s executives have also been sounding out major investors, underscoring that Solomon’s pay for 2020 should be viewed as $27.5 million — and not what he actually got after adjusting for the scandal punishment -- with the goal of making sure the 2021 compensation isn’t seen as an outsized raise.

By that calculation, Solomon’s pay increased 27%. Morgan Stanley boosted Gorman’s pay for 2021 6% to $35 million, and JPMorgan Chase & Co.’s Jamie Dimon’s package climbed 10% to $34.5 million. Last year’s compensation has yet to be announced for Bank of America Corp.’s Brian Moynihan and for Jane Fraser, who rose to the top job at Citigroup Inc. in 2021.

Bank boards often take cues from the action of peers to avoid standing out by overshooting on pay. Even if strong performance justifies higher pay, banks are still wary of scrutiny from Washington over perceived excess, an issue that’s hung over Wall Street since the 2008 financial crisis.

Bloomberg reported last month Solomon and his deputies, who’ve contended with mounting pressure to reward trainees this year, have been searching for ways to juice their own eight-digit pay packages. That’s taken the shape of proposals to partake in a cut of the riches thrown off by new investment vehicles, a bigger carve-out from fund profits, special awards and generous pay raises.