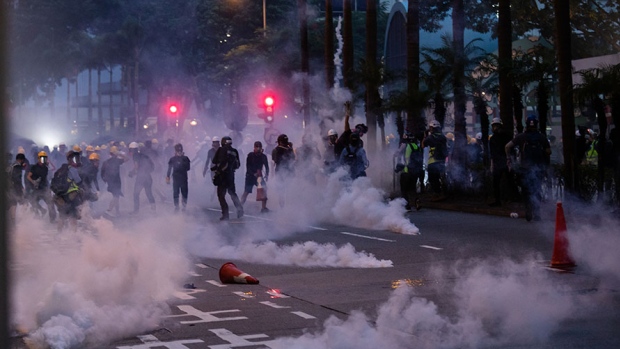 Riot police deploy tear gas during a protest in the Wan Chai district of Hong Kong, on Sunday, Aug.11, 2019. Hong Kong demonstrators clashed with police across the city with officers again resorting to tear gas to try to disperse protesters hurling projectiles and petrol bombs in the 10th weekend of anti-China protests in the city. , Kyle Lam/Bloomberg

Trading in the largest exchange-traded fund tracking Hong Kong stocks jumped to a five-year high as protests in the city intensified.

The iShares MSCI Hong Kong ETF, or EWH, saw its volume soar to 25 million shares on Tuesday in New York -- the most since August 2014, according to data compiled by Bloomberg. Since demonstrations escalated in June, the US$1.4 billion fund has lost about 40 per cent of its assets.

After protesters brought the city’s airport to a standstill on Monday, investors grew increasingly alarmed by the fallout from 10 weeks of anti-government rallies that showed no sign of letting up. The short-term worry is that Hong Kong’s economy is headed for a recession as local turmoil combines with the U.S.-China trade war to pummel retail sales, weigh on real estate prices and sink the city’s US$4.9 trillion stock market.

After hitting the lowest level since January, EWH climbed on Tuesday as the Trump administration de-escalated its dispute with China -- sparking demand for risk assets that had been under pressure.