The historic slide in Canadian consumer confidence continued last week, with sentiment plumbing new depths as the nation braces for a prolonged slowdown.

The Bloomberg Nanos Canadian Confidence Index, which is based on a telephone survey of households, declined sharply for a fourth week as extensive lockdowns continued to trigger mass layoffs. The index dropped to 38.7, by far the lowest reading since polling began in 2008.

Signs have also emerged of troubles in the housing sector, with the survey showing Canadians have abruptly turned pessimistic about real estate. Some 41 per cent of respondents now expect home prices to decline, the highest share for this question since the 2008 recession. A month ago, that number was at 13 per cent.

A housing correction would compound and deepen what is already looking like one of the sharpest economic contractions since the Great Depression due to the Covid-19 pandemic. Not only has the real estate industry been a major contributor to economic growth, but housing has also been major source of wealth for millions of Canadians. 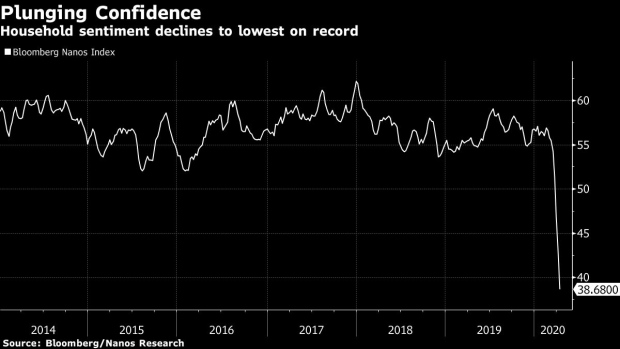 The survey paints a picture of heightened economic anxiety.

The abrupt deterioration in sentiment has occurred with the unprecedented shutdown of much of the nation’s economy.

The government received a total of 5.62 million emergency benefit claims since March 15, Employment Minister Carla Qualtrough said Friday. That includes applications to a new program for workers and business owners who have lost income due to the pandemic.