Coronavirus to cause supply shortage for key auto parts: Professor

Canadian auto sales were nearly halved in March compared to a year earlier, highlighting the distressing economic landscape the country’s businesses are enduring.

Sales of cars and trucks fell to around 95,000 in March, according to estimates released Wednesday by DesRosiers Automotive Consultants. That’s a 48 per cent collapse compared to the same month a year ago and marks the largest decline in data back to 1997. The sales are far below the 150,000 historical average for the month. 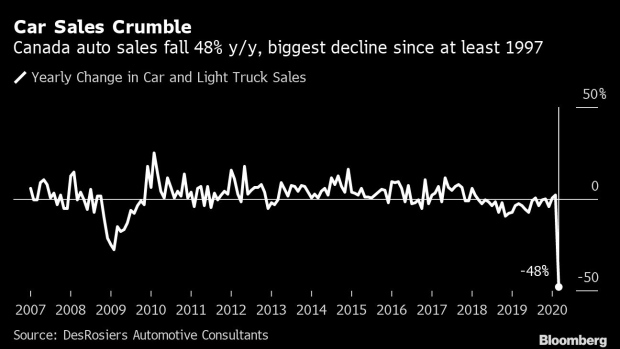 The sudden drop in vehicle sales provides a glimpse into the dire conditions facing Canadian retailers as the coronavirus outbreak keeps businesses closed and potential buyers homebound. Coupled with the breakdown in consumer and business confidence, as well as record spikes in jobless claims, the decline suggests purchases of other big ticket items will take a hit as vendors shut their doors.

“With provinces declaring states of emergency, Quebec closing down front-end dealerships, and many dealerships across the country voluntarily shutting down, March sales fell precipitously in the second half of the month,” DesRosiers, an automotive consulting and research company, said in the release. Sales were up modestly in January and February.