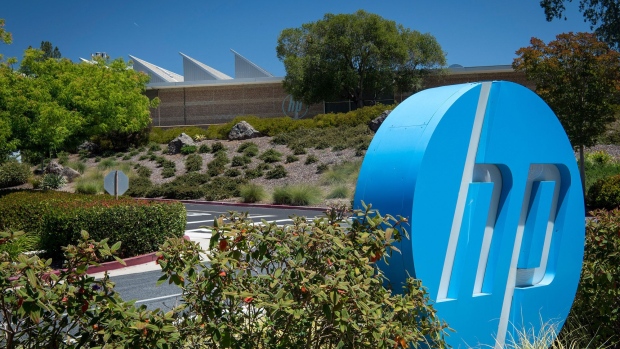 HP Inc. signage stands on display outside the company's headquarters in Palo Alto, California, U.S., on Monday, May 28, 2018. HP Inc. is releasing earnings figures on May 29. , Bloomberg

Hewlett Packard Enterprise Co., a maker of server computers, raised its profit forecast for the year on greater cost-cutting measures, topping most analysts’ estimates. Executives said, however, that trade tension between the U.S. and China has created greater uncertainty.

Profit, excluding some items, will be US$1.62 a share to US$1.72 a share in fiscal 2019, an increase of 6 cents per share from the company’s guidance announced in February. Analysts, on average, projected US$1.64.

Shares, which had jumped almost 5 per cent in extended trading on the forecast, gave back all of the gains on the comments about trade. The stock closed at US$14.34 in New York and has climbed 8.6 per cent this year.

Chief Executive Officer Antonio Neri is trying to make the company a key hardware vendor for big-data needs, seeking to take advantage of technology trends from artificial intelligence to the internet of things. HPE said last week it would acquire Cray Inc., which makes high-performance computers used to process vast amounts of information, in a deal valued at US$1.4 billion. What may prove more consequential is the U.S.-China trade war, which threatens to curb HPE’s revenue and raise some component costs.

Sales fell 4.3 per cent from a year earlier to US$7.15 billion in the period that ended April 30, the San Jose, California-based company said Thursday in a statement. Analysts projected US$7.4 billion, according to data compiled by Bloomberg. Adjusted profit was 42 cents a share compared with analysts’ average estimate of 36 cents.

HPE’s sales have contracted on a year-over-year basis every quarter but one since 2017, and Neri has been keen to reverse that trend -- betting US$4 billion on edge computing, which lets clients process information on hardware far away from centralized data centers.

The company “demonstrated traction in critical areas for our customers that delivered strong margin improvement, EPS above our outlook and solid cash flow,” Neri said in the statement. “We continue to make important strategic moves that further enhance our competitive position and ability to better serve our customers in a hybrid world.”

The U.S.-China trade war is creating “uncertainty” for the hardware maker, which reported declining revenue from China in the quarter, executives said during a conference call with analysts. HPE generates revenue and profit from a joint venture in China that sells its products, H3C Technologies. Tsinghua Holdings owns 51 per cent of the company. The joint venture under performed expectations in the quarter, HPE executives said.

HPE also may have to pay more for some assembly costs as well as minor components that come from China, such as batteries and electronics, said Anand Srinivasan, a Bloomberg Intelligence analyst.