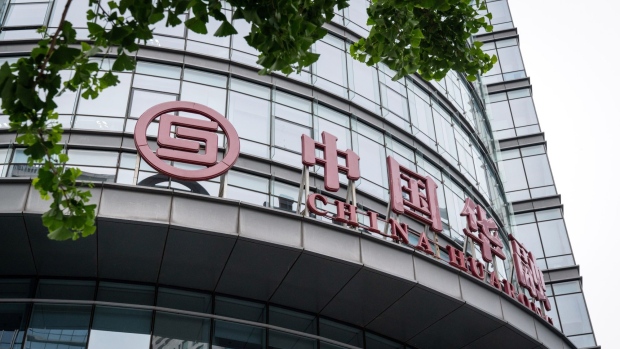 Signage on the China Huarong Asset Management Co. headquarters on Financial Street in Beijing, China, on Wednesday, May 19, 2021. Beijing aced its economic recovery from the pandemic largely via an expansion in credit and a state-aided construction boom that sucked in raw materials from across the planet. Photographer: Yan Cong/Bloomberg , Bloomberg

Huarong is moving to dispose of its 4.99% stake in Chongqing Ant Consumer Finance Co., said people familiar with the matter, who asked not to be named discussing private information. Ant may buy Huarong’s stake, which was valued at 399 million yuan ($62 million) initially, and then coordinate with other shareholders to increase the unit’s capital, one of the people said.

Huarong didn’t immediately respond to a request for a comment. Ant declined to comment in an emailed statement.

Huarong’s difficulties have roiled broader Chinese credit markets this year, with the firm now overhauling its business to restore confidence and shore up its finances. The conglomerate has been looking to sell nearly all of its units outside of distressed debt as part of a government-approved downsizing plan, people familiar have said.

The company also plans a public transfer of its 70% equity in Huarong Consumer Finance to external parties, it said in a filing on Monday.

Ant’s consumer finance unit went into operation in June. It combines the company’s most lucrative online lending operations, Huabei and Jiebei, after a regulatory clampdown.

Ant, China’s largest provider of online consumer loans, put 4 billion yuan into the consumer unit, giving it a 50% stake. The unit will need to provide 30% of funding for all co-loans, based on rules released earlier this year.

Huarong’s shares have been suspended since it missed a deadline to report 2020 results at the end of March. The firm is viewed as an important test of Beijing’s willingness to backstop government-owned borrowers amid a record wave of defaults.

The ruling Communist Party has long put a premium on financial stability, but it also increasingly wants to improve the pricing of risk in local credit markets and wean investors off the assumption that overextended companies will always be bailed out.

Huarong’s board also proposed changing the use of about HK$3 billion ($386 million) of proceeds raised from its 2015 initial public offering to provide capital contribution and fund support to major subsidiaries, according to a separate statement.

Shareholders will vote on the proposals at an extraordinary general meeting Aug. 17. Hong Kong-traded shares of Huarong will remain suspended pending the company’s publication of audited annual results for last year, according to Monday’s statement.

Huarong is expected to announce its past-due 2020 financial results before the end of this month, people familiar have said. The company has continued to repay maturing notes on time and reached agreements with state-owned banks to ensure it can meet obligations through at least the end of August.