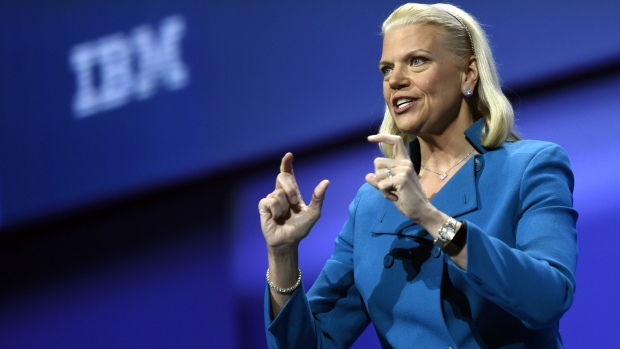 Krishna is currently the head of IBM’s cloud and cognitive software unit and was a principal architect of the company’s purchase of Red Hat, which was completed last year. Rometty, 62, will continue as executive chairman and serve through the end of the year, when she will retire after almost 40 years with the company, IBM said in a statement Thursday. The shares rose about 5 per cent in extended trading.

Since becoming IBM’s first female CEO in 2012, Rometty had bet the company’s future on the market for hybrid cloud, which allows businesses to store data on both private and public cloud networks run by its rivals Amazon Web Services and Microsoft Corp.’s Azure. By then Big Blue, once the world leader in technology, had lagged behind for years after largely missing the initial cloud revolution under her predecessor Sam Palmisano. Much of IBM’s revenue still comes from its older businesses such as mainframe computers.

In 2018, Rometty staked her legacy on the US$34 billion purchase of open source software provider Red Hat, a transaction meant to help save the company from irrelevancy in a business led by younger tech giants. IBM reported five consecutive quarters of negative growth after the deal’s announcement, but broke that streak in the fourth quarter of 2019, suggesting it may have finally turned the corner.

Still, unlike most large technology companies, IBM is smaller now that it was when Rometty took the helm. It ended that year with a market capitalization of more than US$200 billion and revenue of more than US$100 billion. Sales are down more than a quarter since the end of 2012 and its market value has dropped by 49 per cent.

Rometty stayed at IBM past the normal tenure for chief executives and the average retirement date. Three of the four IBM CEOs that preceded her retired at 60.

Jim Whitehurst, CEO of Red Hat, was named IBM’s new president. There was much speculation on Wall Street that Whitehurst was in the running for the top job.

Krishna, 57, was the mastermind behind the Red Hat deal. He proposed the acquisition to Rometty and the board, suggesting hybrid multi-cloud is the company’s best bet for future growth. He has led the development of many of IBM’s newer technologies like artificial intelligence, cloud and quantum computing.

“He is an authentic leader who lives the values of IBM and has taken on ever-increasing responsibilities across the company,” and returned IBM’s cloud and software business to growth, IBM said in the statement.