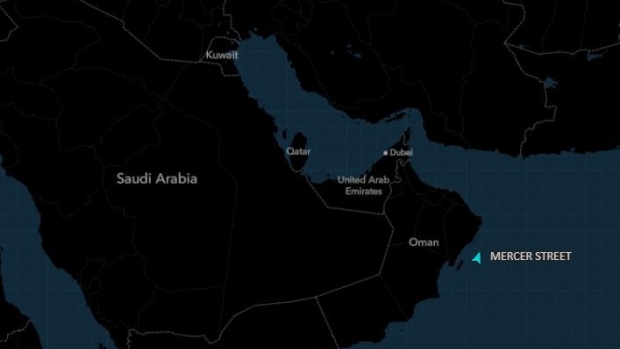 Israel’s prime minister said Iran was “unequivocally” to blame for a deadly attack on an Israel-linked oil tanker off Oman on Thursday, just after Tehran denied responsibility.

“I want to say unequivocally that Iran was the one that attacked the ship,” said Israeli Prime Minister Naftali Bennett on Sunday, in response to Iran’s denial. “We expect the international community to clarify to the Iranian regime that it made a terrible mistake. We have our ways of getting the message to Iran.”

Both U.S. and Israeli officials have said Iran was to blame for the attack, which killed two crew members -- a Romanian and a Briton -- on board the Mercer Street. They were the first fatalities in years in the volatile shipping corridor. U.S. Navy experts believe the oil-products tanker was struck by a drone.

“Israel should stop leveling such accusations against Iran,” a spokesman for the Iranian foreign ministry, Saeed Khatibzadeh, said in a press briefing in Tehran on Sunday. “It’s not the first time that Israel is making such accusations.”

Iran and Israel have traded multiple accusations of shipping attacks in recent months. They’ve happened amid efforts by world powers to restore a 2015 pact that limited Tehran’s nuclear activities in return for an easing of U.S. sanctions. Israel is against a lifting of sanctions or a revival of the deal.

The 600-foot (183 meter) tanker was sailing, empty of cargo, from Tanzania’s Dar es Salam to Fujairah in the United Arab Emirates, said London-based Zodiac Maritime Ltd., manager of the vessel.

Zodiac is controlled by real estate and shipping magnate Eyal Ofer and operates the Japanese-owned carrier. Ofer is among Israel’s richest people, with a net worth of $11.3 billion, according to the Bloomberg Billionaires Index.