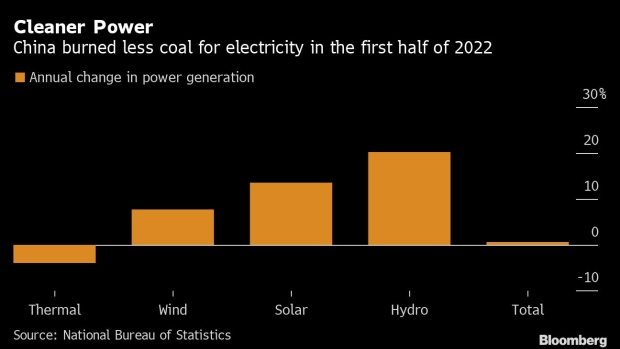 (Bloomberg) -- As it weans itself off Russian fuel and races to secure enough natural gas and coal, Europe’s quest to stay warm this winter will depend heavily on three nations on the other side of the world: Japan, South Korea and China.

The Asian countries, among the world’s biggest importers of liquefied natural gas and seaborne coal, all share a peak heating demand season during the winter with Europe. It’s still too early for meteorologists to make accurate predictions for winter weather patterns, but any forecast for steep dips in temperatures in the three nations could spark a more intense tussle for cargoes.

International competition for fuel has increased since Russia’s invasion of Ukraine upended global trade flows, helping push prices of coal and natural gas to records. In Europe, the squeeze is just about to get tighter. The European Commission will implement a full ban on Russian coal beginning next week, while Gazprom PJSC has slashed pipeline gas flows to Europe. Russia has historically been the European Union’s biggest gas supplier, covering about 40% of demand.

“Weather is of course a wild card especially for Japan and Korea,” said Abhishek Rohatgi, a BloombergNEF analyst. “A colder-than-normal winter could spike prices if Russian supplies to Europe stay low, as it will be very difficult to find additional spot cargoes.”

European nations are racing to prepare for the winter, cutting gas consumption and boosting LNG imports to fill storage caverns, and also restarting mothballed coal power plants. They’ve received a helping hand from Asia so far: China has slashed imports of coal and LNG after boosting domestic output, and is also suffering an economic slowdown due to virus lockdowns.

All three Asian countries have also produced more energy from renewable sources. Japan and South Korea set records for solar power in May, while China burned less coal over the first half of the year as clean sources like hydro power surged.

Even still, the additional purchases from Europe have boosted costs of spot LNG and coal to records this year. Developing nations such as Bangladesh and Pakistan are already suffering from daily blackouts because they can’t afford to pay for cargoes that could keep the lights on.

The competition could get even more fierce heading into winter. Once Japan and South Korea start building their gas stockpiles, the spot LNG market may see more buying from those countries, according to BloombergNEF. Japanese coal inventories are also extremely low, and the two nations will need to boost purchases of the power plant fuel toward the end of the year.

Power supply in Japan is expected to be tight this winter, prompting the government to ask utilities to restart some idled thermal power plants and make sure they are properly maintained and stocked with fuel.

“Coal cargoes -- especially the high energy content coal ones which Japan and Korea use -- are in high demand and mostly contracted out,” BloombergNEF analyst Ali Asghar said. “Japan and Korea will be battling with Europe for most spot cargoes.”

China is in a more comfortable position. Record coal production combined with subdued power demand left inventories at the highest level ever for the mid-point of the year. And even as Russia cuts piped gas supplies to Europe, it’s increasing flows on a new line to eastern China, helping keep inventories ample despite the drop in LNG imports.

“Should there be a very cold winter, Japan and South Korea will likely need additional spot cargoes, in which case they can probably compete with European buyers,” said Xizhou Zhou, head of global power and renewables at IHS Markit. “China, on the other hand, would likely resort to more domestic coal.”