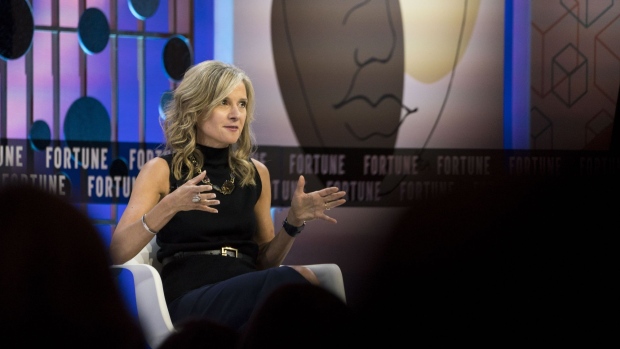 (Bloomberg) -- Kohl’s Corp. Chief Executive Officer Michelle Gass has had a lot of ideas for sparking growth at the department-store retailer, some dating back to before she took the helm nearly four years ago. Most of them haven’t paid off yet.

That underperformance has helped to attract pressure from activist investor Macellum Advisors for two years in a row, and now interest from two potential suitors for the chain: Acacia Research Corp., backed by hedge fund Starboard Value LP, and Sycamore Partners. Kohl’s shares surged 36% on Jan. 24 after reports of the overtures -- putting the stock about back where it was when Gass became CEO in May 2018.

“The problem is that their credibility is not that high,” David Swartz, a Morningstar analyst, said of the Kohl’s management team.

Macellum struck a similar note in an open letter to the Kohl’s board this week, asking that one of its representatives join the board to run a strategic review as the current members are incapable of “objectively evaluating possible bids relative to its historically overly optimistic assessments of management’s standalone plans.” Activist hedge fund Engine Capital LP also urged a sale process in a recent letter to Kohl’s.

Kohl’s has acknowledged receiving expressions of acquisition interest but said it won’t comment further unless it deems that in shareholders’ best interests. Through a spokesperson, Gass declined to comment for this story.

Kohl’s turnaround plans since 2014 have fallen short of sales targets it promised. And while the Covid-19 pandemic has upended most apparel retailers’ business plans, many of Kohl’s peers have fared better than the Menomonee Falls, Wisconsin-based company during Gass’s tenure.

Gass, who is the company’s first female CEO, contended with activist pressure last year as well, assuaging a group led by Macellum with board representation and a promise of stronger results. But even after this week’s leap, Kohl’s stock is down 6.5% through Wednesday, to $61.27, since Gass took over as CEO. That’s better than the 22% slide of Macy’s Inc., but TJX Cos. is up 62% in that time and Target Corp. has jumped 181%. The S&P 400 Consumer Discretionary Index is up 51%.

Gass, now 53, was widely seen as a rising star of the business world when she joined Kohl’s in 2013 as its first chief customer officer. Advertising Age magazine named her a Woman to Watch in 2007, during the nearly 17 years she spent at Starbucks Corp. There she oversaw several divisions and helped to popularize products like the Frappuccino frozen coffee drinks, whose toppings of whipped cream and caramel drizzle were her innovation.

At Kohl’s, the new executive was a key architect of a turnaround plan the company called the “Greatness Agenda,” introduced in May 2014. Goals included focusing on growth in women’s apparel, launching new distribution channels to increase sales, investing more in the active and wellness category and boosting sales of major brands.

“We are actually starting from a very solid base, but our intent is to widen that gap, right, widen that gap and see measurable progress and improvement to truly be best-in-class,” Gass said at an investor meeting later in 2014. “Now we’re putting a stake in the ground to achieve that.”

Kohl’s started carrying Under Armour and other popular brands that people recognized. It consistently highlighted the fact that its 1,160 stores were located outside of malls, which have been steadily losing customers. And it launched partnerships with other big-name retailers to boost foot traffic.

Gass replaced Kevin Mansell as CEO in May 2018, and she doubled down on the partnership strategy -- with an uncertain payoff so far.

In one notable program, people can drop off Amazon.com Inc. packages for return at Kohl’s stores. As CEO, Gass expanded the program to nearly all of the chain’s locations.

Kohl’s is tight-lipped about how financially beneficial the tie-up has been to its business. In calls with analysts, Gass generally says that her company gains new customers -- the company has touted 2 million from the program -- and improves conversion of browsers to buyers. Analysts note that the arrangement imposes labor and store-space costs on Kohl’s.

The company also launched space-sharing partnerships with brands such as Planet Fitness and Aldi, and many analysts point to its Sephora partnership as promising. In late 2020, Kohl’s said it would start operating Sephora shop-in-shop locations within its stores, after the LVMH-owned beauty brand ended a longtime partnership with the largely mall-based J.C. Penney. The locations started opening in 2021, and Kohl’s has added prominent Sephora signage to its facades.

“The win of Sephora basically gave the blessing that the Kohl’s real estate is valuable because they chose Kohl’s instead of J.C. Penney,” said Hoai Ngo, an analyst at Bloomberg Intelligence. With Sephora at Kohl’s, consumers “don’t have to navigate through a mall, but instead they can just pull up and pick up the products.”

It’s too early to quantify financial gains from the Sephora tie-up, but Kohl’s has made some strides toward matching expectations with results. In an October 2020 presentation, the company set an undated goal of 7% to 8% operating margins; that figure was 8.4% in the company’s most recent fiscal third quarter.

Still, Cowen Inc. analyst Oliver Chen wrote this week that Kohl’s may attract other strategic or financial bidders at prices as high as $85 a share. If Gass can’t convince Wall Street she can get the stock there with the company independent, she may be out of time.