Larry Berman: The state of NAFTA and what it means for the loonie

In the past few weeks, Canada has taken a back seat on trade-related foreign policy.

Incoming Mexico President Lopez Obrador is very interested in doing a trade deal sooner than later even though he officially takes the reigns after the U.S. November elections. The Trump administration will likely use any Mexico accord to extract concessions from Canada. The Trudeau government has put Canada on its heels. He may be forced to give up supply management and more politically accepting on autos.

Once the trade risk is out of the way, a cloud will be lifted, but the next few months could be rocky. Best bet is that it all does not get wrapped up until early 2019, but there may be a big push to get it done before the U.S. elections. Trade plays well to the Republican base and the GOP will need the help retaining leadership of Congress.

When NAFTA modifications are done, Trump will focus on China. The current slate of tariffs is starting to bite Beijing, but they have stated they are willing to play hardball, and while it looks willing to substantially increase purchases of U.S. goods, more volatility is likely around other more sensitive issues. Trump tries to get something done prior to the midterm elections, but it will depend on how hard he pushes on intellectual property theft— probably the biggest deal breaker.

Europe may be harder to get accomplished than seems to be the mainstream belief, but there seems to be a willingness to negotiate tariffs down to zero, which is the best long-term outcome. Over what timeframe? I guess that is for the negotiators to figure out, but it’s measured in years to a decade or so.

Reducing the trade deficit will generate a separate set of issues. It means the there are fewer dollars circulating overseas, which likely strengthens the greenback and makes U.S. exports more expensive. It may throw a wrench in the dollar-based global trading system, encouraging other countries to settle trade in different currencies. Not good if you want the dollar to stay the world’s reserve currency. With that capital now going elsewhere, and federal spending still way out of control, U.S. debt servicing costs will rise and so will interest rates. But I doubt they can go up too much before the US economy comes to a grinding halt. We heard news that U.S. housing demand is slowing significantly last week on a key earnings call. 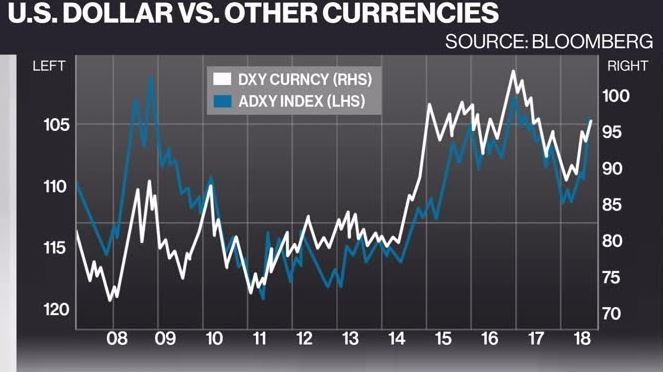 The USD has been weakening versus most currencies since the U.S. election and Trump saying he wants a weak dollar to help on trade. But since he turned up the tariff talk, it’s gone the other way. The perception that an escalating trade war would likely do more damage to the growth prospects of non-U.S. economies than to the US has also helped to support the U.S. dollar against other major currencies. It explains why U.S. equities have been doing well when most other market (Europe and EM), have been down all year.

I recall back in 1997-98 when a strong dollar and stress on EM currencies eventually led to a Russian debt default, roiling global markets for a few months until Greenspan called his central bank buddies to cut rates. Powell has a much longer fuse and we can expect the Fed to keep raising rates until the U.S. economy grinds to a halt. On days like this, it seems like objects in the mirror are closer than they appear.

For the Canadian dollar, flight to safety into the U.S. dollar and weaker energy prices should push the Canadian dollar below 75 cents again and possibly as low as 72.5 cents until we see a NAFTA deal. We do not see the Bank of Canada raising rates in September, and depending on data, we will see one more rate hike while the U.S. Federal Reserve does two more. For now, the tail winds point to a weaker loonie. 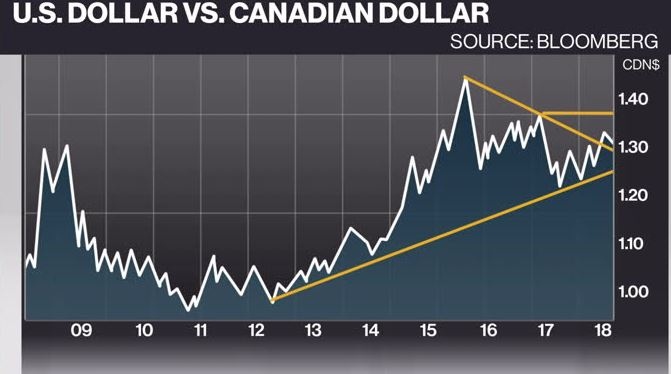