A catalyst is emerging for the Canadian dollar that is gnawing at the central bank’s influence and potentially its monetary policy: the performance of global equities.

The loonie has traditionally been seen as a commodity-linked currency because of the country’s vast natural resources. But trillions of dollars of stimulus, along with interest rate cuts from the Bank of Canada, the Federal Reserve and other central banks have realigned those forces.

The one-year rolling correlation of the dollar-loonie to world equities is stronger than the pair’s relationship with base metals, crude oil and yield differentials, according to the Royal Bank of Canada. That means strategists may have to modify their models to better reflect global risk appetite. It also gives the BOC more leeway in policy without worrying about currency effects.

Investors “look at the world from a ‘risk on/risk off’ standpoint,” George Davis, strategist at RBC, said by email. They are “using equity markets as their main proxy for risk sentiment. So, the huge recovery in equities since late March has been accompanied by CAD appreciation. BOC policy is a very neutral factor at the moment.”

Swap spreads reflect the declining importance of the BOC’s policy rate. Earlier this year pre-COVID, at 1.75 per cent, Canada had one of the highest rates among advanced economies helping drive the loonie’s price action. Having kept the rate at 0.25 per cent since March, it’s a different story, and traders are wagering the central bank will leave its overnight rate unchanged again Wednesday and well into next year as the economy slowly rebounds. 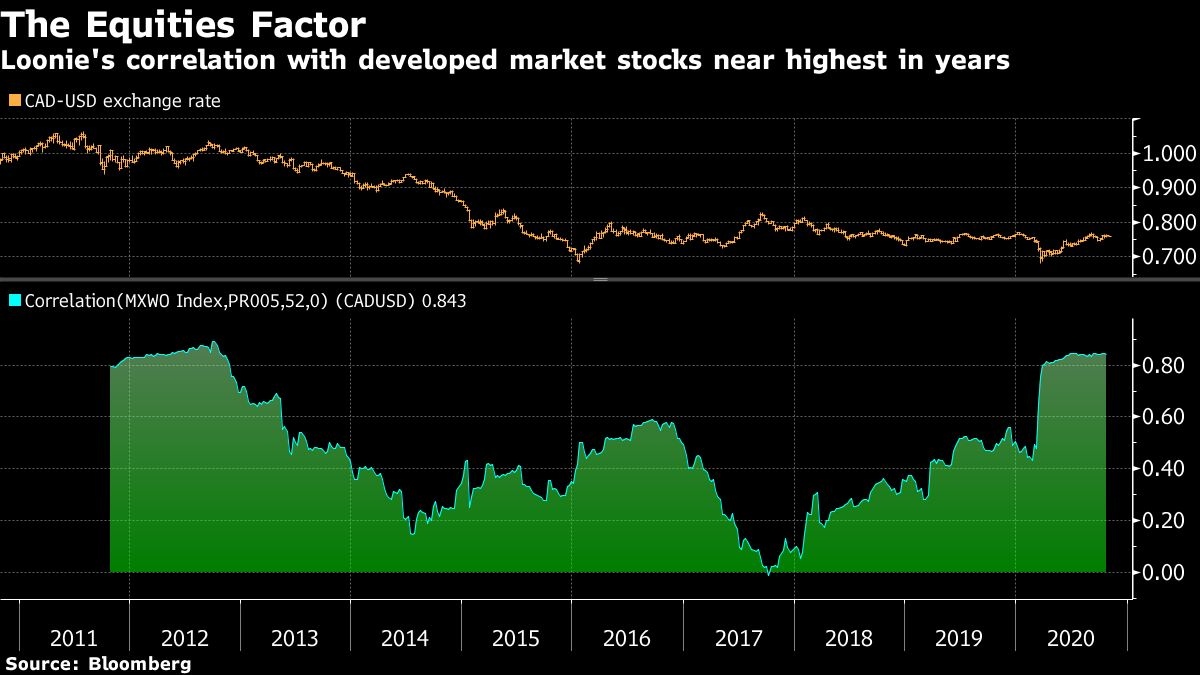 With the BOC and commodities playing a lesser role, the loonie’s fate is increasingly tied to broader risk sentiment. All eyes are centered on the U.S. as the White House and Congressional leaders battle over a new round of fiscal stimulus that could fuel more demand for riskier assets. At the same time, opinion polls suggest former Vice President Joe Biden is likely to defeat President Donald Trump in the Nov. 3 election, and a resounding win by Democrats could tip the balance toward more government spending.

Of course, there’s a flipside to the loonie’s new alliance. If the global economic recovery sputters or coronavirus cases continue to multiply without a break-through vaccine, stocks could take a turn for the worse. On Monday, the loonie weakened versus all Group-of-10 currency peers and stocks fell amid coronavirus flare-ups in Europe and as U.S. stimulus talks stalled.

Technically, the dollar-loonie pair has been consolidating for nearly two-months after falling from a year-to-date high of 1.4668 set in March to end Monday at 1.3212. Even after the uptick at the start of week, the pair remains below a descending trendline, currently 1.3288, where a close above that line would likely point to further gains. Moreover, a subsequent drop below the psychological 1.30 support level would suggest the pair is breaking out of its range and will likely breach its year-to-date low of 1.2957 nearby as a new trend forms.

“It is safe to say that the Canadian dollar is at the mercy of global risk sentiment at the moment,” said Simon Harvey, FX analyst at Monex Europe and Monex Canada.