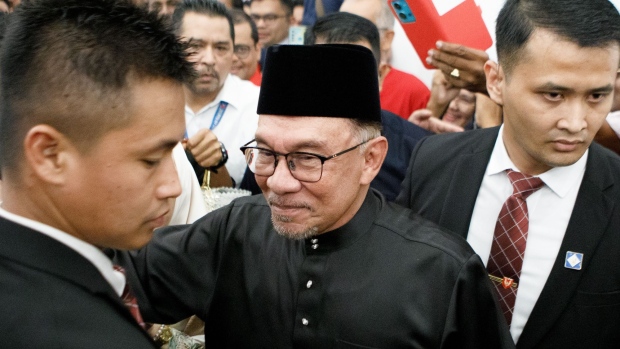 (Bloomberg) -- Malaysian Prime Minister Anwar Ibrahim said he will review billions of ringgit worth of government projects that past administrations had approved, including flood mitigation plans and pandemic assistance packages.

Anwar, who is also finance minister, said “tens of billions of ringgit” in Covid relief during Muhyiddin Yassin’s time as premier was allocated without due procedure. Muhyiddin was prime minister from March 2020 to August 2021, and now leads the opposition.

“I want to remind Muhyiddin, do not challenge me because it’s clear there were several processes and procedures that weren’t followed, and there were companies with vested interests or linked to families,” Anwar told reporters on Tuesday, after clocking into the Finance Ministry for the first time.

Malaysia had spent about 83 billion ringgit ($19 billion) on pandemic-related aid, including 5 billion ringgit for vaccine purchases and 21 billion ringgit for wage subsidies, Muhyiddin said Monday. “Not a single sen entered my personal accounts,” the former premier said. The National Audit Department and the central bank would have flagged it otherwise, he said.

“I am not afraid to be investigated because I know I didn’t divert the people’s funds that was entrusted to the government to use for the purpose of helping the people during difficult times,” he wrote on Facebook.

Anwar on Tuesday said he was also scrutinizing recent flood mitigation projects, adding that 7 billion ringgit of spending was approved through direct negotiations and he was putting a stop to it.

Former environment minister Tuan Ibrahim said in a statement later Tuesday that projects meant to tackle disasters need to be carried out immediately to prevent further losses, and the prime minister should not assume that all projects awarded through direct tender process as being improper.

Anwar was named prime minister last month, ending a near-week-long political deadlock after the general election resulted in a hung parliament. His reformist Pakatan Harapan alliance won the most seats in the vote, 82 out of 222, while Muhyiddin’s Islamist-dominated Perikatan Nasional coalition came second with 73 seats.