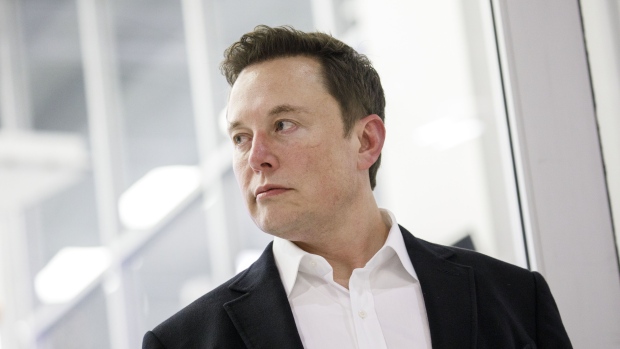 (Bloomberg) -- The world’s most famous entrepreneur is ratcheting up a battle with its most powerful government, as Elon Musk sharpens his critiques of President Joe Biden and aligns himself with Republicans in an acrimonious US culture war.

Musk on Friday complained that the White House “has done everything it can to sideline & ignore Tesla.” That’s after saying earlier this week that he would vote Republican, an embrace of a new, more partisan identity for someone who has never fit neatly into Washington’s tribal politics.

Musk, the chief executive officer of both Tesla Inc. and SpaceX, has dialed up his political bombast after lobbing a $44 billion bid to buy Twitter Inc., a deal he has framed as a free-speech crusade. While the move has alarmed many Democrats, Republicans have gleefully seized upon the world’s richest person as a new ally.

If the transaction closes, Musk’s growing empire of electric cars, reusable rockets and space-based satellites would expand to include a social media platform that both parties will treat as a battleground in the upcoming midterm elections.

As Musk’s businesses have grown, he’s become a symbol of everything from immigrant ingenuity to income inequality. His latest partisan posturing casts him in a new light. Bureaucrats in regulatory agencies may see him more readily decry their investigations as mere political attacks. It will be more difficult for the Biden administration to shrug him off, and puts other lawmakers in the president’s party in a bind.

“Elon’s unconventional behavior has had outsized, positive results for him,” said Gene Munster, a co-founder of Loup Ventures, a research-driven technology investment firm. “The Democrats are in a Catch-22. On the one side, Musk eviscerates them. And on the other side, his products are a part of their agenda. They will probably tread carefully when it comes to doing anything that’s a headwind to Tesla.”

While Musk, 50, has little patience for government bureaucracy, he is not exactly a Washington outsider. SpaceX is a major government contractor, flying NASA astronauts to the International Space Station and launching top secret satellites for the US military. Though his companies’ lobbying presence is modest compared with competitors like General Motors Co. and Boeing Co., he has courted politicians on both sides of the aisle for over a decade.

In 2010, Tesla received a $465 million loan from the Department of Energy, a lifeline for what was then a startup automaker. Tesla went public that June and paid back the loan in full in 2013. President Barack Obama visited SpaceX’s launch site in Florida during his first term.

When President Donald Trump was elected in 2016, Musk briefly served on his business councils, where he tried to push on immigration reform. He ultimately left the groups after Trump pulled the US out of the Paris Climate Accords. Still, Musk frequently espouses Trump’s brand of populist conservatism, including by meeting Friday with Brazilian President Jair Bolsonaro.

Musk’s sprawling collection of businesses mean he is on the radar of several federal agencies.

The National Highway Traffic Safety Administration opened two defect investigations that are ongoing into Tesla’s driver-assistance feature known as Autopilot. Earlier this year, National Transportation Safety Board Chairwoman Jennifer Homendy called the company’s decision to test early versions of what it calls “full self-driving” on the roads “a disaster waiting to happen.”

In November, the SEC issued a subpoena to Tesla seeking information on governance processes around compliance with an amended settlement agreement stemming from Musk’s failed effort to take Tesla private in 2018.

The Federal Aviation Administration is in the throes of an environmental review of SpaceX’s plans to launch its massive new Starship rocket from Boca Chica, Texas. The agency postponed a decision on April 29 after the company made “multiple changes” to its application.

The FTC is scrutinizing Musk’s Twitter bid for antitrust concerns, though most expect the agency will allow the deal to close without an in-depth probe. The FTC is separately investigating why Musk didn’t inform the agency when he amassed a 9% stake in Twitter this March.

Though Musk is most widely known as the CEO of Tesla, he’s emerged as a major player in the military industrial complex. He forced his way into the business of military and intelligence satellite launches after campaigning vigorously in Congress and suing the Air Force for the right to compete with a longstanding joint venture of defense giants Boeing Co. and Lockheed Martin Corp.

After settling a lawsuit against the Air Force in 2015, closely held SpaceX was certified to compete for military launches. SpaceX won 17 of the 42 military launches planned for Phase 2 through fiscal 2024, with the rest going to the Boeing-Lockheed venture.

“There were certainly difficulties and tensions in the DOD/SpaceX relationship,” Cris Chaplain, a former space systems acquisitions director with the Government Accountability Office, said in an email. “But in the long run both parties benefited tremendously.”

SpaceX spent an average of $2.2 million from 2017 to 2021 influencing the federal government. It currently has 37 lobbyists, most at outside firms, working for it. About three-quarters of them previously worked for the government, according to OpenSecrets, which tracks money in politics.

As Ukraine defends itself from Russia’s invasion, SpaceX has played a critical communications role with Starlink, its effort to provide high-speed broadband internet across the globe. The US Agency for International Development (USAID) delivered 5,000 Starlink terminals to the government of Ukraine through what it describes as a “public-private partnership” with SpaceX.

Musk spent much of his career in reliably Democratic California, making his first fortune in Silicon Valley and then living in Los Angeles for two decades. In 2020, he relocated to conservative bastion Texas, a place with no state income tax where SpaceX is expanding and Tesla has built a new factory.

For his vast wealth, Musk is a minor political donor. He has contributed just $529,000 to political candidates since 2009, Federal Election Commission records show. About $282,000 of that amount went to Democrats, including a $40,000 donation to Obama’s re-election campaign in 2012.

Since 2017, he gave Republican candidates and committees $91,700 compared with $67,800 for Democrats. He’s yet to make a donation in the current election cycle, FEC filings show.

Democratic Senator Elizabeth Warren chalks up Musk’s rightward shift to money. “The Republicans are the party of letting the billionaires get away without paying taxes, so it doesn’t particularly surprise me,” Warren said in a hallway interview at the Capitol Thursday.

Republican fans will find Musk isn’t an ally on all of their pet issues. This week he said expanded immigration to the US, including from Mexico, is a “no-brainer.” Tesla will also support employees who need to travel for out-of-state health care, including abortions. Still, House Minority leader Kevin McCarthy called Musk “a good friend of mine” in a floor speech last fall. Committees connected to McCarthy have gotten $129,000 from Musk, more than any other politician.

Musk has pitched his bid for Twitter as one to protect free speech, and has said he will allow Trump back on the platform. The idea has delighted conservatives, with Senator Ted Cruz calling the deal “the most important development for free speech in decades.”

Owning Twitter would put Musk at the center of a policy fight over legal protections for online tech giants, known as Section 230. Critics have argued that courts construed the 1996 law too broadly, conferring sweeping immunity for tech companies over the content posted on their platforms. The political parties vastly differ on the problem and how to resolve it. Conservatives contend that the platforms censor right-wing voices -- a view Musk has echoed -- while Democrats say unfettered online discourse fuels hate speech.

Since agreeing to buy the social media platform, Musk has been on offense against Democrats, this week blasting them as “the party of division & hate” and criticizing Biden’s administration as one that “doesn’t seem to get a lot done.”

Biden has generally tried to steer clear of feuding with Musk, though a White House spokesman said Friday, “count us as unsurprised that an anti-labor billionaire would look for any opportunity to nip at the heels of the most pro-union and pro-worker President in modern history.”

In February, California’s Department of Fair Employment and Housing took the rare step of suing Tesla, saying it “found evidence that Tesla operates a racially segregated workplace where Black workers are subjected to racial slurs and discriminated against in job assignments, discipline, pay, and promotion.” The federal Equal Employment Opportunity Commission is also investigating. Those labor issues were part of why Tesla was booted from the ESG version of the S&P 500 Index -- a move that Musk blasted as “a clear case of wacktivism.”

Unlike legacy automakers, Tesla’s factories are non-union. Biden is a staunch union advocate, a view that has long cast a pall over his view of Tesla. Musk has balked at Biden’s proposed subsidies for union-made US electric vehicles -- the measure, made in a policy proposal that has since collapsed, would have offered subsidies of up to $12,000, but the labor provision would have excluded Tesla.

“In the case of Biden, he’s simply too much captured by the unions, which was not the case with Obama,” Musk said at a conference in Miami on Monday.

Musk has angrily rebutted a report that SpaceX paid $250,000 to settle a sexual harassment claim in 2016. He said the accusations are “utterly untrue” and called the article a “hit piece” designed to interfere with his Twitter acquisition.

And though he tweeted in September that “I would prefer to stay out of politics,” he’s now taken a page from Trump’s playbook, portraying himself as a victim of partisan smears.