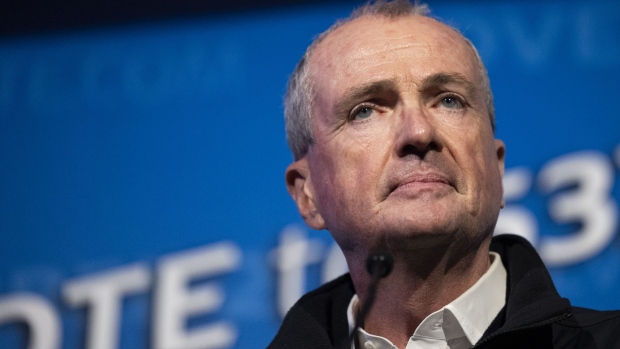 Phil Murphy, New Jersey's governor, speaks during a Get Out The Vote (GOTV) rally in New Brunswick, New Jersey, U.S., on Thursday, Oct. 28, 2021. Murphy's lead narrowed against challenger Jack Ciattarelli in the final days of campaigning ahead of the Nov. 2 election, according to a new Monmouth University poll. , Bloomberg

Both legislative houses, controlled by Murphy’s fellow Democrats, have voting sessions on Wednesday. Among the bills they’re expected to pass are criminal and civil protections for health-care workers and out-of-state residents seeking abortions, and 10 proposals to tighten some of the nation’s strictest firearms laws.

Murphy, 64, started his second term in January signing a bill to keep New Jersey among the roughly half of states allowing the procedure. In May, more than a year after Murphy introduced a package of gun-restriction proposals, one gunman killed 21 people in a Uvalde, Texas, elementary school, and another shot 10 people to death in a Buffalo grocery store.

The legislature’s agenda-topper, the record $50.6 billion spending plan for the fiscal year that starts July 1, includes $2 billion in property-tax relief checks for homeowners and renters. A planned $6.8 billion pension payment marks the second straight year that New Jersey will meet its full obligation in more than two decades.

Murphy and lawmakers in tougher economic times have come to budget agreements mere hours before the June 30 midnight deadline, but flush state coffers this year led them to negotiate on where to spend rather than cut. The state has at least $10.7 billion in unexpected revenue driven by pandemic spending.

If signed as is, the budget will be about 35% higher than Murphy’s first spending plan in 2018.

Republicans have argued unsuccessfully for more generous tax relief of $8 billion, in addition to a heftier surplus and debt paybacks.

Murphy has touted his $2 billion rebate plan as an antidote to the nation’s highest property taxes, averaging $9,284 last year. Homeowners and renters would receive checks for as much as $1,500.

Other legislation expected to pass would temporarily allow free entry to state parks, and cancel fees for driver’s, professional and marriage licenses, for roughly $60 million in taxpayer savings. Lawmakers also are expected to favor cutting state debt by $1.3 billion.

Another bill involves the future of Liberty State Park in Jersey City, adjacent to the Liberty National golf course owned by Reebok founder Paul Fireman. Supporters say the bill, with $250 million set aside, would revitalize the park, on the Hudson River waterfront with views to Manhattan and the Statue of Liberty. Critics say it would allow the course, with a heliport and boat access, to expand into a sensitive environmental habitat.