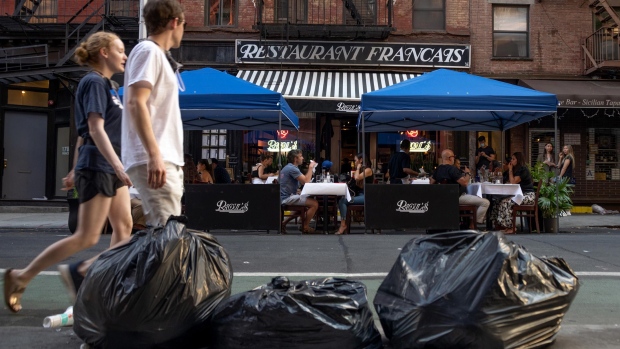 (Bloomberg) -- Days after New York City’s business leaders complained to Bill de Blasio that “quality of life” issues were deterring workers from going back to the office, the mayor announced a plan to boost trash pickup and reduce litter on the city’s streets.

The mayor said late Tuesday that the sanitation department will restore 65 weekly litter-basket trucks, a 24% increase over current levels, in 27 neighborhoods across the city. The city’s Economic Development Corp. will also partner with the Doe Fund, a nonprofit that employs formerly homeless people, to provide additional cleaning in parks and neighborhoods through the end of the year. In addition, the city will sponsor volunteer clean-up campaigns to pick up litter in streets and parks.

“New Yorkers deserve clean, safe communities,” de Blasio said. “Our sanitation professionals have been heroes throughout this crisis. They deserve all the support they can get in their fight to keep New York City clean.”

The move came after the Partnership for New York City sent a letter to the mayor signed by 163 business leaders, including David Solomon of Goldman Sachs Group Inc. and Blackstone Group Inc.’s Stephen Schwarzman, decrying what they perceived was an upswing in crime and deteriorating services in the city. They said those quality-of-life issues were more important factors than Covid-19 in discouraging employees from returning to work.

“Despite New York’s success in containing the coronavirus, unprecedented numbers of New Yorkers are unemployed, facing homelessness, or otherwise at risk,” the Partnership’s letter stated. “There is widespread anxiety over public safety, cleanliness and other quality of life issues.”