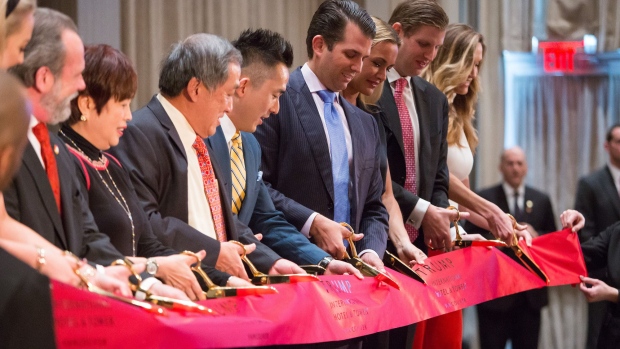 The operator of the Trump International Hotel and Tower in Vancouver has filed for bankruptcy, citing a plunge in revenue after the coronavirus pandemic halted international travel.

The tower has been closed since March and “ongoing expenses since the outbreak of COVID-19 and lack of revenue” pushed the company into insolvency, TA Global Berhad, the company’s Malaysian parent, said in a filing Friday. TA Hotel Management leased the hotel premises and operated it, according to the filing.

The gleaming glass tower opened in the western Canadian city in early 2017, months after the election of President Donald Trump. Its launch was marred by protesters. Gregor Robertson, Vancouver’s mayor at the time, wrote to the tower’s developer, Joo Kim Tiah: “Trump’s name and brand have no more place on Vancouver’s skyline than his ignorant ideas have in the modern world.”

Tiah, chief executive officer of TA Global and scion of one of Malaysia’s richest tycoons, is the head of Vancouver-based developer Holborn Group, which owns the tower. Under a 2013 agreement, Holborn licensed the Trump name for the project.

Designed by a famed Canadian architect, the glass tower twists 45 degrees into the sky, meaning no two views from inside the building are alike. Its 217 luxury residences had set a Canadian record for condos in 2016, selling for an average price of C$1,615 ($1,233) a square foot.

Canada’s borders have been closed to most international travelers since the middle of March -- a measure that has been extended to Sept. 30 for most non-U.S. travelers.