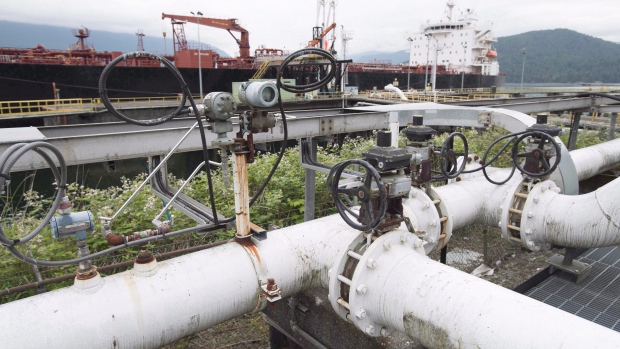 Kinder Morgan’s proposed pipeline expansion is caught amidst a “challenging” time of transition, from the country’s shift to a low-carbon economy to court victories that have reshaped First Nations’ land claims, says an appointee to a federal ministerial panel gathering community reaction to the $6.8-billion plan.

Kim Baird, one of three members of the advisory panel, made the point Tuesday in Vancouver during a break in public hearings examining the controversial expansion of the Trans Mountain pipeline between the Alberta oil sands and Burnaby, B.C.

The panel was appointed by the Liberal government to conduct additional work even after the National Energy Board recommended approval, with conditions.

During Tuesday’s hearing, Vancouver Mayor Gregor Robertson launched a blunt attack on the proposal, raising concerns about the financial, social and environmental cost of a possible spill linked to either the expanded pipeline or increased tanker traffic it would generate.

In an interview, Ms. Baird, a former chief of the Tsawwassen First Nation near Vancouver, acknowledged the ongoing debate.

“I think it’s an extremely challenging time for any project [given] what seems to be changing goal posts,” she said.

“The debate it triggers is, I think, reflective of the transition Canada is going to be in, in the foreseeable future from what I can observe.”

Ms. Baird noted the pipeline proposal is being debated at a time of change, including the election of a federal government committed to revamping the environmental assessment process to regain public trust, as well as case law evolving on the issues of First Nations’ rights and title.

However, she did not take a stand on the project. She noted the panel, appointed by Natural Resources Minister Jim Carr, is focused on gathering community input on the previous National Energy Board review and determining whether there are things the NEB process did not examine adequately.

“It’s not my job to agree or disagree; it’s to relay the public’s view to the minister,” she said. “It’s not in our terms of reference to make recommendations or a decision on this project.”

The NEB review concluded with the approval of the expansion of the oil pipeline subject to 157 conditions.

But Mr. Carr established the panel, which is to come up with a report ahead of the federal cabinet reaching a final decision on the project by Dec. 19.

Ms. Baird said themes emerging in the hearings include the sense that the scope of the NEB process didn’t adequately assess spill risk or climate change, and First Nations’ concerns that consultation has been inadequate.

She said it appears the public is welcoming the opportunity to be heard by the panel and that their comments have been enlightening, though she did not elaborate on specifics Tuesday. “There’s usually some kernels we get every meeting.”

She said it will be up to Mr. Carr to decide on the release of the panel’s report.

The City of Vancouver has launched a court challenge to quash the NEB’s recommended approval, joining other groups, including environmentalists and First Nations, who have launched legal attacks.

On Tuesday, Mr. Robertson came to the hearing to further present his concerns. Once again, the mayor said the NEB process was flawed and biased, and the pipeline is too risky for the city, region and Canada.

Following the proceedings, Mr. Robertson predicted a “huge impact” on support for the Liberals on the West Coast if they approve the pipeline.

Asked whether federal approval of the pipeline expansion would damage a robust relationship with Prime Minister Justin Trudeau – who, in December was the first sitting prime minister since his father in the 1970s to visit Vancouver City Hall – the mayor said he had faith Ottawa would make the “right decision” and find other solutions to support Alberta’s needs given the challenges that province is facing due to the declining cost of oil.