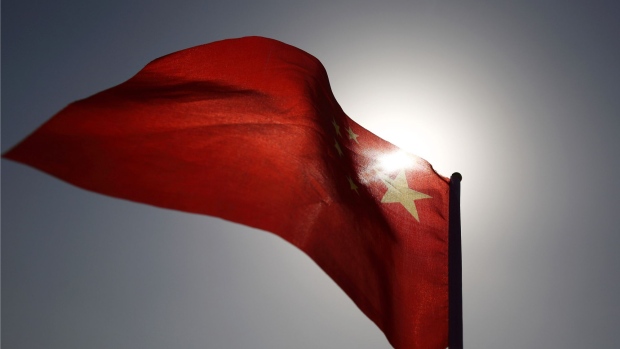 A Chinese national flag flies in Beijing, China, on Monday, March 2, 2015. China's annual meeting of the National People's Congress, which begins March 5 in Beijing, is expected to set government policies for the year on issues ranging from economic growth to military spending and pollution. Photographer: Tomohiro Ohsumi , Bloomberg

OTTAWA -- Prime Minister Justin Trudeau says his government will not stop standing up for human rights in China -- or calling out Beijing for its coercive approach to diplomacy.

Trudeau says that includes the situation in Hong Kong, where pro-democracy activists have been protesting a widely criticized national security law imposed on the territory by Beijing.

On Thursday, the Chinese ambassador to Canada warned Ottawa against granting asylum to Hong Kong residents fleeing the situation, saying doing so would amount to interfering in China's internal affairs.

Cong Peiwu said if Canada cares about 300,000 Canadian citizens in Hong Kong -- and Canadian companies doing business there -- it should support efforts to fight what he called fight violent crime.

Trudeau said China is engaging in coercive diplomacy by imprisoning two Canadian men, Michael Kovrig and Michael Spavor, in retaliation for the arrest of a Chinese high-tech executive on an American extradition warrant.

"We will make sure that China knows that not only are we standing up for human rights and calling on a safe return of the two Michaels who've been arbitrarily detained," Trudeau said, "but we stand with allies around the world and the United States, to Australia, to Great Britain, to European nations to many nations in every corner of the world who share these concerns."

Cong told reporters in a video press conference on Thursday that China views criticism of its record on human rights as political interference. He also rebutted allegations that China has forcibly detained ethnic Muslim Uighurs in the country's southeast.