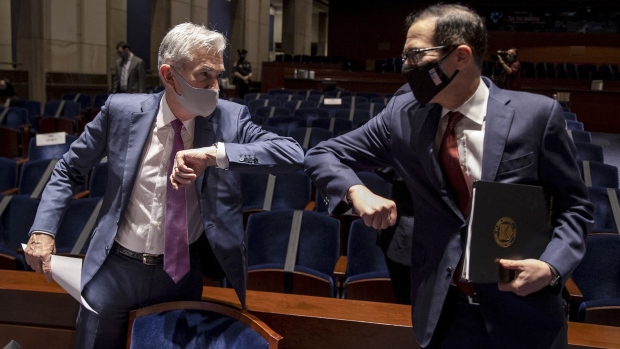 Jerome Powell, chairman of the U.S. Federal Reserve, left, and Steven Mnuchin, U.S. Treasury secretary, wear protective masks while greeting each other with an elbow bump during a House Financial Services Committee hearing in Washington, D.C., U.S., on Tuesday, June 30, 2020. The Federal Reserve is preparing for the possibility of an economically debilitating second wave of coronavirus infections even as it's hoping that can be avoided. , Photographer: Bloomberg/Bloomberg

Federal Reserve Chair Jerome Powell and Treasury Secretary Steven Mnuchin are set to be grilled by lawmakers Tuesday on the need for more stimulus to shore up the U.S. economy’s recovery from the coronavirus slump.

The focus of the House Financial Services Committee hearing will likely fall on fiscal policy, with time running short for Congress to agree on another round of spending measures before it shuts down ahead of November elections.

The US$2 trillion bill passed in March has helped production and employment rebound after the steepest drops on record. Its impact is now fading, and lawmakers have been deadlocked for weeks over how much more cash to pump in. Investors are losing faith that a deal will get done this year, one reason why the S&P 500 is currently headed for its first monthly drop since March.

“Failure to pass any additional fiscal measures would likely lead us to downgrade our growth estimates” for the fourth quarter, Goldman Sachs economists wrote on Friday.

The Fed, which has cut interest rates to zero and signaled it will keep them there for years, says that monetary stimulus alone won’t be able to sustain the recovery -– and Congress will have to help out. “More fiscal support is likely to be needed,” Powell said last week.Mnuchin also backs another round of spending, identifying restaurants and travel as industries that need help. “Now is not the time to worry about shrinking the deficit,” he told CNBC last week.

The Treasury chief has been a key negotiator in the fiscal standoff. Proposals in Congress range from a US$2.2 trillion package backed by Democrats to one worth about US$660 billion that’s supported by most Republicans. President Donald Trump has lately indicated he could favor a compromise that roughly splits the difference between those numbers.

Powell and Mnuchin are also due to testify before the Senate Banking Committee on Thursday, and the Fed chief will report to a separate House committee on the coronavirus crisis on Wednesday. 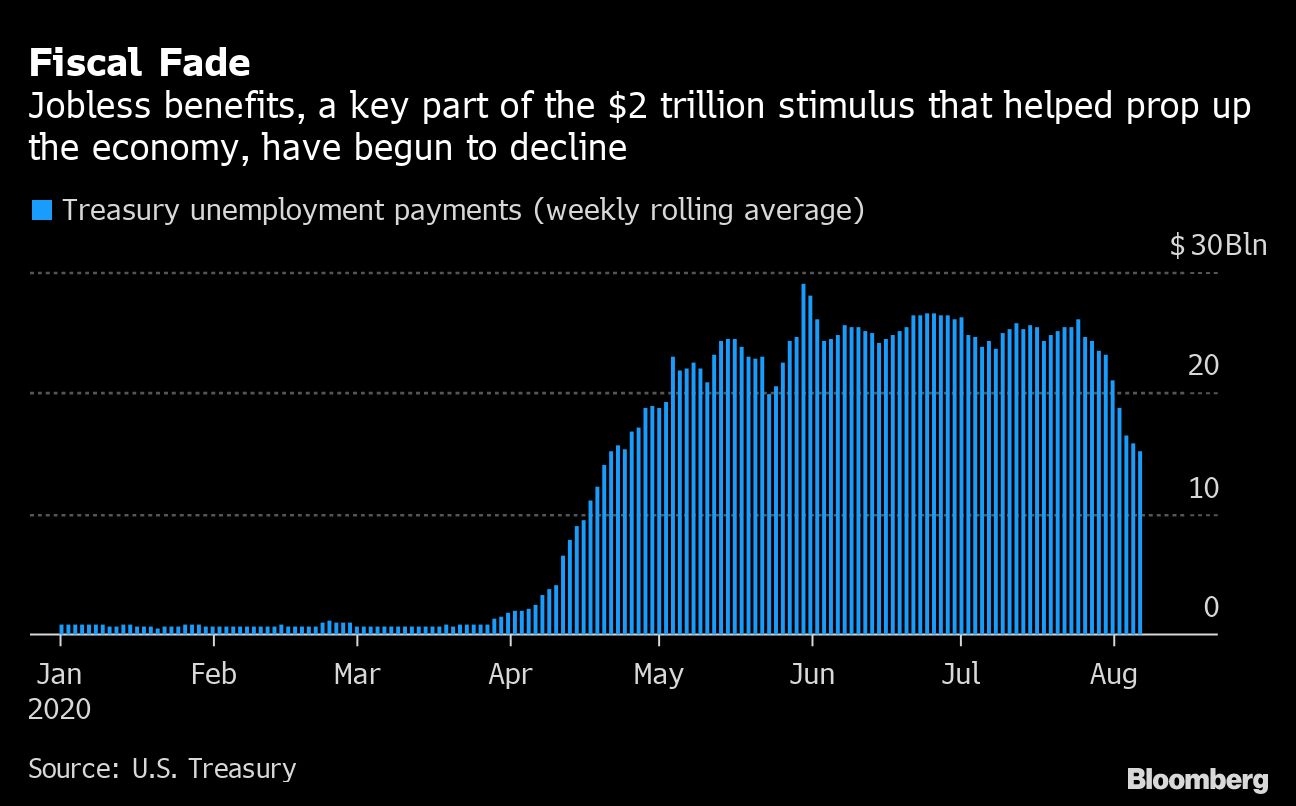 Here are some key issues to watch for in the hearings:

One potentially thorny issue that Senate Republicans could raise for Powell is the question of whether some of the money earmarked for Fed lending programs should be reallocated.

Since the central bank unleashed a range of facilities in March, backed with funding from the Treasury, liquidity in credit markets has largely been restored. That has reduced the need for borrowing under the programs -- and spurred some Republicans to argue that a portion of the backstop money could now be used elsewhere. Trump has cited a figure of US$300 billion.

The Fed’s Main Street lending program, which may come in for special scrutiny in Congress. The US$600 billion facility designed to help small-to-mid sized businesses has been criticized for buying just US$1.5 billion in loans so far. One reason is the reluctance of banks to lend to the riskier businesses that may need credit the most.

Help for state and local governments, which have been on the front lines in combatting the public health crisis and distributing unemployment benefits, is expected to be another focus for lawmakers in the hearing.

Democrats have been advocating for more money to be sent directly to states and municipalities, which have seen their usual sources of tax revenue dry up. Republicans have generally opposed the idea on the grounds it would bail out mismanaged local authorities.

Meanwhile the Fed’s effort to help local governments, the municipal facility, has only bought two loans to date. Fed officials say it is meant as a backstop in case the market is thrown back into the turmoil it experienced early in the pandemic.

Unemployment remains at historically high levels even after a recovery in recent months as the economy reopened, with the jobless rate at 8.4 per cent in August. Congress approved a US$600-a-week federal top-up for unemployment benefits early in the crisis.Since that measure expired at the end of July, lawmakers have been divided on whether to continue the extra payments. Trump issued an executive order maintaining the benefits at a lower level, but those funds are running out too.

Powell and Mnuchin will likely be pressed for their views on what’s needed next to help the unemployed -- and also for small businesses that are still struggling. The government’s Paycheck Protection Program, which bailed them out with grants and loans, is now closed.