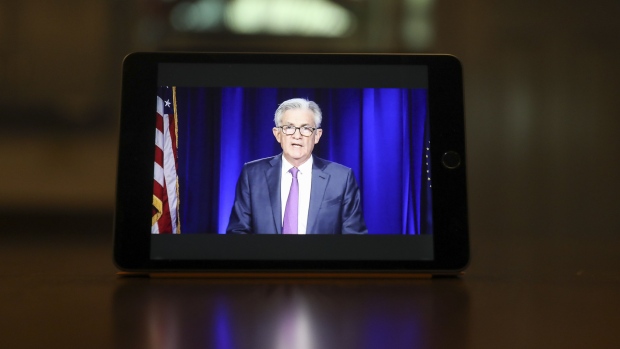 Jerome Powell, chairman of the U.S. Federal Reserve, speaks during a virtual news conference seen on a laptop computer in Tiskilwa, Illinois, U.S., on Wednesday, Sept. 16, 2020. The Federal Reserve left interest rates near zero and signaled it would hold them there through at least 2023 to help the U.S. economy recover from the coronavirus pandemic. Photographer: Daniel Acker/Bloomberg , Bloomberg

Federal Reserve Chair Jerome Powell said the central bank hasn’t made a decision to issue a digital currency, citing the need for further work and “extensive” public consultation with stakeholders before doing so.

“It’s more important for the United States to get it right than to be first,” Powell said Monday on a panel hosted by the International Monetary Fund during its annual meeting. “We are committed to carefully and thoughtfully evaluating the potential costs and benefits of a central bank digital currency for the U.S. economy and payments system. We have not made a decision to issue a CBDC.”

Fed officials have swerved sharply from their previously cautious approach to digital currencies, embracing a full-scale study on whether one might be suitable for the U.S. Powell said about 80 per cent of central banks around the world are exploring the idea, however.

“There are a number of ways that a CBDC might improve the payments system, and it is mainly this area that motivates our interest,” Powell said.

The central bank announced in August that it was expanding experimentation with technologies related to digital currencies. In addition, the Boston Fed is working with researchers at the Massachusetts Institute of Technology to build a hypothetical digital currency oriented for central bank use. Many of the policy questions are unresolved, but those efforts are indicative how seriously the Fed now regards the project.

U.S. central bankers were slow to warm to the idea of a digital currency, but their interest picked up after Facebook Inc. proposed its own unit of exchange for its users, known as Libra. Digital money could change the way monetary policy works in the economy, as well as speed up a payment system that remains slow and taxing for consumers and behind many other nations.

Powell said any digital currency should be a complement to, and “not a replacement for cash, and current private-sector digital forms of the dollar, such as commercial bank money.”

On Libra, Powell said he agreed “that it highlighted the need to improve cross-border payments, and generally succeeded in focusing attention on payments-related issues, including consumer protection, cyber-security and privacy.”

Central banks from Sweden to Canada and China are studying whether their money should have a digital counterpart. Sweden began an e-krona project in 2017 and has issued two reports on the topic. The Bank of Canada has launched a formal research project that has partnered with other monetary authorities. The Bank of Japan said earlier this month that it aims to start early phase experiments next year.

--With assistance from Catarina Saraiva and Christopher Condon.