China’s recovery from the coronavirus pandemic continued in the third quarter and showed signs of broadening in September as consumer spending accelerated, keeping the economy on track to be the world’s only major growth engine this year.

Gross domestic product expanded 4.9% in the third quarter from a year ago, missing economists’ forecast for a 5.5 per cent expansion. Both retail sales and industrial production gained momentum in September, reassuring markets that the recovery is on track.

The numbers show China’s early and aggressive containment of the coronavirus has set the economy up for a faster rebound than any of its peers. That’s a rare positive for a world economy still clawing its way out of its worst slump since the Great Depression -- a revival further complicated by the resurgent virus in Europe and the U.S.

“It’s an encouraging and hopeful message for the rest of the world,” said Rob Subbaraman, global head of macro research at Nomura Holdings Inc. in Singapore. “If you successfully handle the health crisis, your economy can recover.”

Retail sales expanded 3.3 per cent in September from a year earlier, industrial production grew 6.9 per cent and investment growth accelerated to 0.8 per cent in the nine months to the end of the quarter. Strong import growth in the third quarter may have dented the GDP number, even though it’s broadly seen as a bullish sign for demand.

Output expanded 0.7 per cent in the year to date, meaning that the world’s second-largest economy has now regained all the ground it lost in the early months of the year. 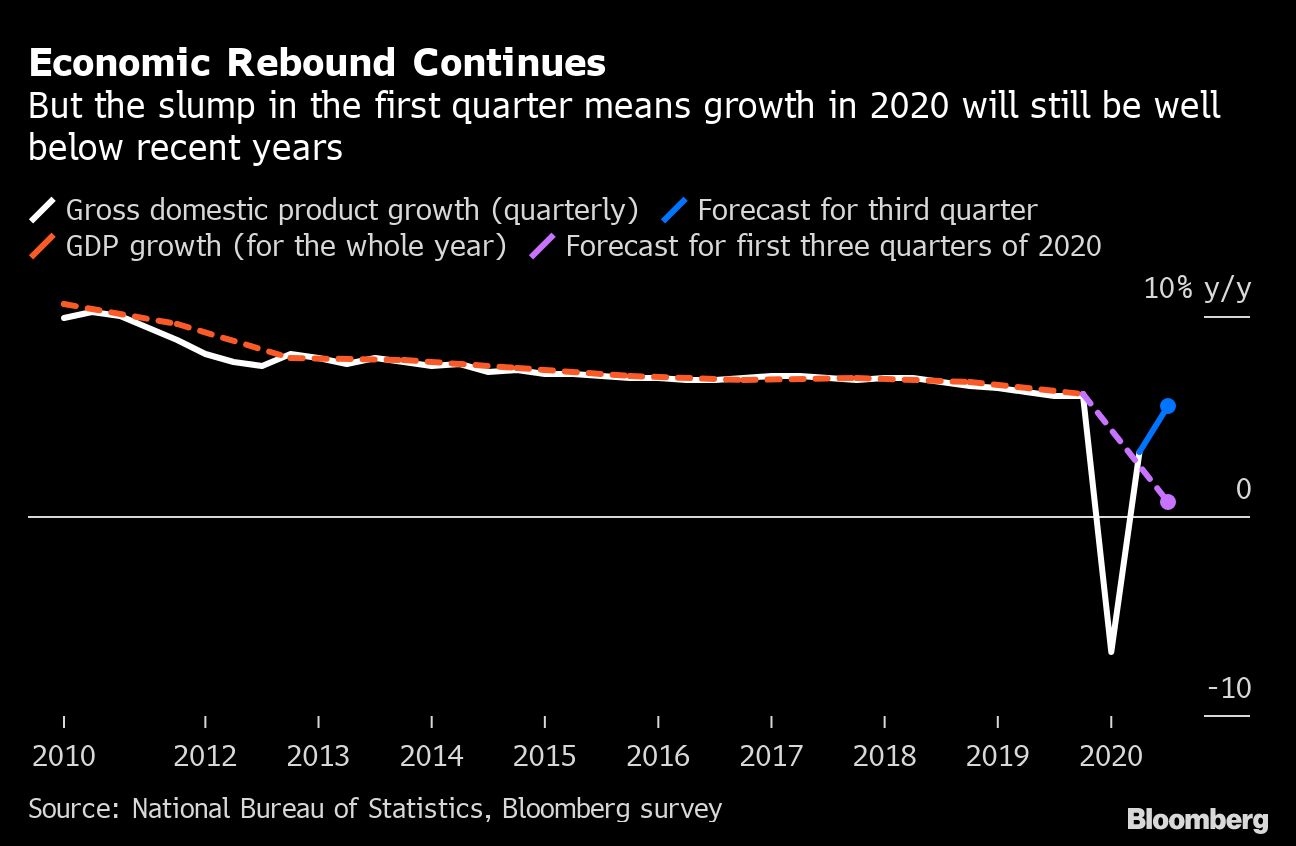 Markets were mixed on the news. The CSI 300 Index of stocks, which last week was within one per cent of a five-year high, slipped 0.3 per cent as of the mid-day break in Shanghai. The yuan was little changed near 6.7 per dollar, after briefly trading at its strongest in 18 months.

​Underpinning the recovery has been the containment of the virus that has allowed factories to quickly reopen and capitalise on a global rush for medical equipment and work-from-home technology. That export strength was offset by a recent increase in imports, depressing the contribution of net trade to output growth.

“That should not be viewed negatively,” said Liu Peiqian, China economist at Natwest Markets Plc in Singapore, because the strong import growth suggests the recovery in underlying economic growth is accelerating.

The improving picture has come with relatively restrained government borrowing and central bank easing compared to China’s peers. Instead, the government has focused on targeted support for business and the central bank on keeping liquidity flowing; today’s readings suggest there’s no need to change tack.

“The data -- on balance -- suggest there is no urgency for the government to add fresh stimulus, though the window is not completely closed for a rate cut by year-end. The focus is still on targeted measures. Heading into next year, whether the tax measures are extended will shape the optimal mix of fiscal and monetary policy. In the event fiscal support is rolled back, more rate cuts are likely.”

“Right now, China has basically got Covid-19 under control,” Yi said in a webinar organized by the Group of 30. “In general, the Chinese economy remains resilient with great potential. Continued recovery is anticipated which will benefit the global economy.”

Yet the recovery isn’t without its holes.

Even with the virus under control, shoppers have spent about 7% less in the first nine months of the year compared to the same period last year. Services sectors including tourism, education and travel are continuing to lag.

“The economy is not entirely back in its strongest shape,” Helen Qiao, chief Greater China economist at Bank of America, told Bloomberg Television. “The services sector is not doing that well.”

It’s also unclear how durable the recovery will prove to be given domestic pressures from unemployment and rising corporate and household debt. China Evergrande Group, the world’s most indebted developer, has rattled investors amid fears for its financial health.

Much will also depend on how relations with the U.S. evolve after November’s presidential election. Any worsening of trade frictions could throw a spanner in the export revival.

Analysis of International Monetary Fund data shows the proportion of worldwide growth coming from China is expected to increase from 26.8 per cent in 2021 to 27.7 per cent in 2025, according to Bloomberg calculations. The IMF says Chinese growth is virtually the only reason it expects global output to be 0.6 per cent higher by the end of 2021 compared to the end of 2019.

Getting the economy quickly back on its feet is crucial to China’s global ambitions. They were hammered home last week by President Xi Jinping during a tour of tech-hub Shenzhen, where he doubled down on calls to take the global lead in technology and other strategic industries.

Urging an “unswerving” commitment to technological innovation in a period of “changes unseen in a century,” Xi again promoted a need to become more self reliant, a policy that is expected to be a central part of a new 5-year economic plan that will be discussed at a Communist Party gathering expected later this month.

Nearer term, the return in consumer confidence has set the economy up for a strong finish to the year, said Natwest’s Liu. “GDP is on track to grow further into the fourth quarter.”