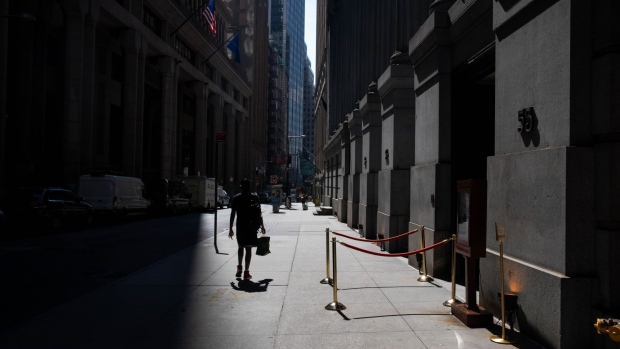 A pedestrian walks along Wall Street near the New York Stock Exchange (NYSE) in New York, U.S., on Monday, July 20, 2020. U.S. stocks fluctuated in light trading as investors are keeping an eye on Washington, where lawmakers will begin hammering out a rescue package to replace some of the expiring benefits earlier versions contained. Photographer: Michael Nagle/Bloomberg , Bloomberg

Investors are abandoning cash holdings at a record clip as momentum continues to build behind 2020’s risk rally.

Roughly US$5.4 billion has exited from the US$20 billion iShares Short Treasury Bond exchange-traded fund -- the biggest ultra-short duration ETF -- over 14 consecutive weeks of outflows. That was the longest streak on record for the product, whose ticker is SHV. Meanwhile, investors have pulled US$2.4 billion from the US$14 billion SPDR Bloomberg Barclays 1-3 Month T-Bill ETF (BIL) over 10 weeks, according to Bloomberg Intelligence data.

Investors accumulated record amounts of cash earlier this year amid concern over the impacts of the coronavirus pandemic on the global economy, with assets in money-market mutual funds soaring to a record US$4.8 trillion in late May. However, that cash is coming off the sidelines as stocks surge and corporate bonds look increasingly appealing. Additionally, the Federal Reserve’s commitment to keep interest rates at near-zero levels for the foreseeable future is further curbing appetite for short-duration Treasury ETFs.

“It’s recognition that ‘ZIRP’ will be around for a long time, combined with a rising risk appetite,” said Kathy Jones, Charles Schwab Corp.’s chief fixed-income strategist, referring to the concept of a zero interest-rate policy. “Short-term Treasury ETFs are looking less attractive than alternatives. Equities are benefiting. We also see interest in foreign equities and high-yield and emerging-market bonds.”

The S&P 500 has surged more than 55 per cent from its March’s bottom, after plummeting into the swiftest bear-market on record. The Fed’s credit market backstop has boosted both investment-grade and junk bonds, with the largest high-yield debt ETF climbing nearly 24 per cent since late March. The emerging-market outlook is also considerably brighter amid the dollar’s continued weakness and the Fed’s new average-inflation targeting regime.

The exodus from ultra-short duration ETFs is also likely due to investors trying to eliminate the “cash drag” in their portfolios by reinvesting in higher-yielding assets, according to Dan Suzuki at Richard Bernstein Advisors.

“Because they’re not generating any yield, they are acting as huge dead weight in many people’s portfolios,” said Suzuki, the firm’s deputy chief investment officer. “Investors are probably chasing higher returns, which means moving up the risk spectrum.”