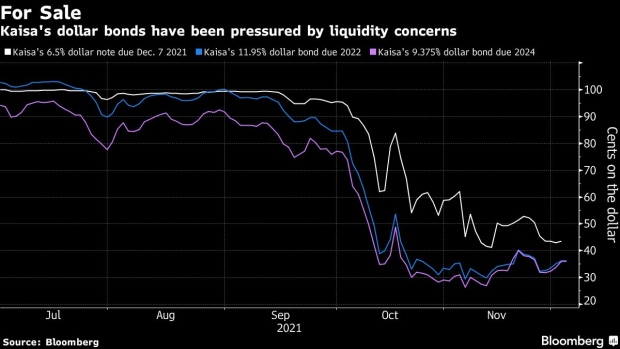 Kaisa Group Holdings Ltd.'s Future City development under construction in the Qingpu District of Shanghai, China, on Tuesday, Nov. 30, 2021. The newfound stability in Chinese dollar bonds will be tested this week as Kaisa Group announces whether creditors agreed to swap $400 million of dollar notes in a move designed to avert default. Photographer: Qilai Shen/Bloomberg , Bloomberg

Evergrande said in an exchange filing late Friday that it plans to “actively engage” with offshore creditors on a restructuring plan, with grace periods on two dollar bond payments ending Monday. Kaisa meanwhile failed to win bondholder approval for a debt swap, putting the firm on course for a default unless it can reach a last-minute agreement with creditors.

Several property bonds and stocks continued their sell-off Friday, joining a wider decline in U.S.-listed Chinese shares. Evergrande extended its plunge to 85% on the year, while the company’s 8.75% dollar bond maturing in 2025 tumbled to less than 20 cents on the dollar. Kaisa fell 8.8% to a record low of 93 cents in Hong Kong.

Evergrande’s long-awaited debt restructuring may finally be at hand, posing a fresh test for Xi Jinping’s government as it tries to rein in the country’s financial excesses without derailing economic growth.

The embattled developer said in an exchange filing late Friday that it plans to “actively engage” with offshore creditors on a restructuring plan, offering its most explicit acknowledgment yet that its $300 billion of overseas and local liabilities have become unsustainable.

A barrage of statements from Chinese regulators -- several of which landed just minutes after Evergrande’s announcement -- suggested authorities are striving to contain the fallout on homeowners, the financial system and the broader economy rather than orchestrate a bailout.

The government of Guangdong, the southern province where Evergrande is based, summoned founder Hui Ka Yan to express concern over the company’s announcement and said it would dispatch a team to the developer to ensure “normal” operations. The People’s Bank of China blamed Evergrande’s problems on the company’s “own poor management” and “reckless expansion.”

Sunshine 100 China Holdings Ltd. defaulted on $179 million of debt and interest payments due Sunday as the pain of higher borrowing costs hits indebted companies across the sector.

Sunshine 100 said in a filing that it won’t be able to repay the $170 million of principal and more than $8.9 million of interest on its 10.5% senior notes due 2021. Sunshine 100 said in August that it wasn’t able to repay the principal, premium and accrued interest of its 2021 bonds. The company’s default will also trigger provisions under some other debt instruments.

China is betting that a pickup in infrastructure spending can spur investment and cushion a property-led slowdown which has dragged economic growth down to almost its lowest pace in more than three decades.

But because the property curbs are hitting government revenue from selling land, Beijing will need to ease its tough campaign to crack down on “hidden” local government debt if it wants a long-lasting revival in infrastructure spending.

Loans from Chinese lenders to the real estate sector rose both sequentially and from a year earlier in November, a newspaper backed by the country’s central bank reported.

Country Garden Holdings Co. Ltd. said it will soon apply to Chinese exchanges for the issuance of supply-chain asset-backed securities.

The property developer will start ABS sales after regulatory approval, according to a statement posted on the company’s WeChat account Sunday, without giving further details such as size of the issuance.

Kaisa, which became China’s first developer to default on dollar debt in 2015, now risks once again reneging on its obligations. The company is struggling to raise funds as surging borrowing costs shut it out of the primary dollar bond market and a housing slowdown squeezes revenue. Kaisa is the nation’s third-largest issuer of dollar notes among property firms, with some $11.6 billion outstanding.