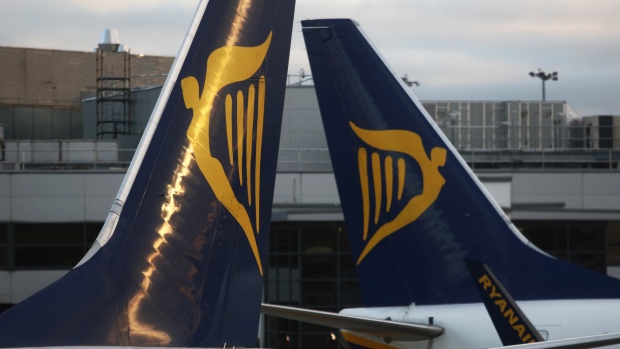 Ryanair Holdings Plc’s bid to block a strike by U.K. pilots rather than return to talks means a walkout before Britain’s busiest weekend for air travel is more certain, according to the union that called the action.

Ryanair has lost the chance to resolve the pay dispute by seeking a High Court injunction at a hearing to be held Wednesday, the day before the start of the 48-hour strike at airports including the carrier’s biggest hub at London Stansted, the British Airline Pilots’ Association said Monday.

Balpa General Secretary Brian Strutton said the attempt to halt the walkout on what he called a legal technicality after refusing further negotiations is “another demonstration of the bullying tactics the airline appears to favor.”

He also said that Dublin-based Ryanair is continuing to sell tickets for the strike days, which come in the build up to the Aug. 26 bank holiday, and questioned whether Europe’s biggest discount carrier will be prepared to offer compensation to passengers.

Chief Executive Officer Michael O’Leary is grappling with a slew of pay disputes across Europe after being forced to recognize unions two years ago. Labor relations deteriorated further when he said hundreds of jobs must go and bases close to cope with a possible no-deal Brexit and slower growth after the grounding of Boeing Co.’s 737 Max.

In a parallel dispute, lawyers for Ryanair are seeking an injunction against a strike by the the group’s Ireland-based pilots on the same two days this week as the U.K. action, arguing that the walkout would be unlawful. A hearing in Dublin began Monday and will run into a second day, with the judge saying it may take until Wednesday to weigh up the arguments.