Royal Dutch Shell Plc said it expects to make the first profit from pumping oil since the start of the pandemic.

Shell’s upstream unit, which largely handles the exploration and production of crude, was able to capture “the upside from the current commodity price environment” in the first quarter, according to a statement Wednesday.

While earnings from natural gas, refining and chemicals helped Shell post an overall profit last year, its core business reported consistent losses after energy prices plunged due to Covid-19. The return to profit in the upstream is another signal that the industry is recovering from the historic slump.

The turn of fortune isn’t limited to Shell. European peer BP Plc on Tuesday said that it had achieved its target of reducing net debt to US$35 billion a year earlier than expected, a threshold at which it can restart share buybacks. 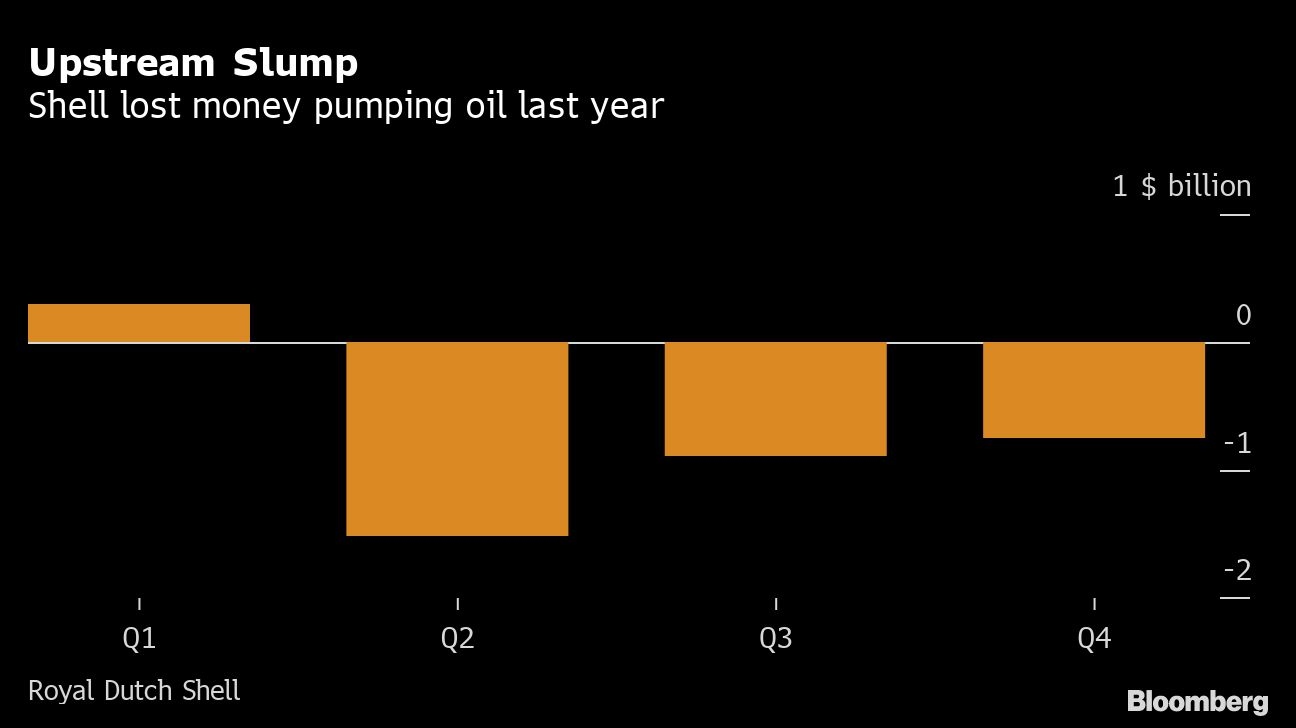 While the industry is recovering, it still has some way to go before it has fully healed.

Despite Chief Executive Officer Ben van Beurden saying Shell was on the “right side” of moves in the market for liquefied natural gas in January -- when prices rose to record highs -- first-quarter trading and optimization results in its integrated gas unit will be “significantly below average.”

Shell said working capital will increase as a result of higher commodity prices, which will affect cash flow in its integrated gas, upstream and chemical units. In the fourth quarter, the Anglo-Dutch major was unable to cover spending and its dividend with free cash flow, even as oil prices continued their recovery from historic lows.

“Operationally, the business appears to be performing below expectations,” Borkhataria said. This is a probably a short-term issue and “we do not think it materially alters the investment case into 2021,” he said.

Performance at the division that refines and markets fuels, which was profitable for most of 2020, improved slightly compared with the fourth quarter, Shell said. Oil trading results will be average.

The severe winter storms in Texas, which crippled the state’s infrastructure and shut down a swath of oil and gas fields, will have an adverse impact on adjusted earnings of about US$200 million, Shell said. It will report first-quarter results on April 29.

In a separate statement, the company said that it wouldn’t walk away from any trade associations, including the influential American Petroleum Institute, despite some difference on climate policies. The lobby group’s board voted last month to endorse putting a price on CO2 emissions, a decision Shell says it was closely involved with.

French rival Total SE left the API earlier this year, criticizing in particular the group’s support for candidates in the last U.S. elections who backed leaving the Paris climate agreement.

Shell also published its annual sustainability report on Wednesday. It reiterated its carbon foot print declined last year as a result of the pandemic-induced demand drop and asset sales. The company has promised to slash greenhouse gas emissions over the next three decades and has linked the pay of more than 16,500 staff to a target of reducing the carbon intensity of its products by 6 per cent to 8 per cent by 2023.