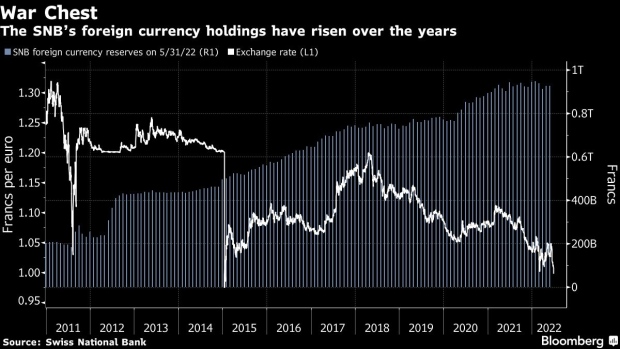 The Swiss National Bank is likely to halt its foreign currency purchases after higher inflation decreased the need for a weak franc, Credit Suisse said.

“The inflation outlook does not allow for much Swiss franc depreciation anymore,” the bank’s economist Maxime Botteron, wrote in a note. “The SNB will therefore most likely halt its foreign currency purchases that have contributed to reducing appreciation pressures on the Swiss franc.”

Such a shift would be a noteworthy change for the central bank, which purchased more than 775 billion francs ($812 billion) worth of foreign currencies since 2009 in order to keep the safe haven-currency from strengthening.

The franc rose to parity with the euro on Wednesday for the first time since the outbreak of the war in Ukraine. Credit Suisse estimates that a 10% drop in the euro-franc exchange rate will reduce Swiss inflation by 0.5 percentage point.

“Moreover, to avoid that a depreciation of the Swiss franc worsens the inflation outlook through higher imported prices, the SNB will likely sell foreign currencies when the Swiss franc depreciates,” Botteron wrote.

SNB President Thomas Jordan said this month the central bank is ready to sell its currency holdings if the franc weakens too much. It can act in “both directions,” he said. On June 16, the SNB unexpectedly increased interest rates for the first time since 2007 and raised its policy rate by 50 basis points to minus 0.25%.

The central bank slowed its foreign currency interventions last year, purchasing 21.1 billion francs worth of foreign exchange versus the year prior, when it spent 109.7 billion francs.