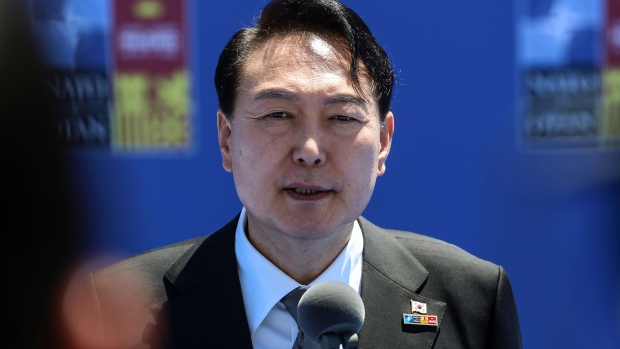 (Bloomberg) -- South Korean President Yoon Suk Yeol said Japan is a partner as the two countries face “common threats,” offering to improve ties between the allies of the US whose help the Biden administration has sought in putting up a united front against the likes of China, Russia and North Korea.

Yoon said he wants to “swiftly and properly improve” relations with Tokyo stemming from historical disputes. The comments were in a speech Monday to mark Japan’s World War Two surrender and the end of its 1910-1945 colonial rule over the Korean Peninsula.

“When Korea-Japan relations move toward a common future and when the mission of our times align, based on our shared universal values, it will also help us solve the historical problems that exist between our two countries,” Yoon said in the Liberation Day speech.

Last month, the two countries’ foreign ministers met in Tokyo and said they would seek an early resolution to the issue of compensation for Koreans conscripted during the colonial period to work in factories and mines that helped power Japan’s Imperial Army.

Ties between the neighbors fell to new depths under Yoon’s predecessor, President Moon Jae-in, over a series of court decisions awarding compensation to the former workers. Japan sees the decisions as unlawful and the issue as “settled completely and finally” under a 1965 agreement that established diplomatic ties and was accompanied by $500 million in aid and loans.

A plan being floated by Yoon for a joint fund between the governments stands little chance of support in Japan, still angry after a separate fund for women trafficked into Imperial Army brothels was scuttled by Moon. South Korea’s foreign ministry submitted an argument to the Supreme Court last month, asking for a delay of the verdict on liquidizing assets of a Japanese company to pay compensation for the conscripted workers. The ministry added it was making various diplomatic efforts to resolve the issue.

Yoon is unlikely to get money for any joint fund, or for South Korea to pay on its own, from a parliament where Moon’s Democratic Party holds a majority and has demanded Japan show what it sees as proper contrition. Yoon, whose support rate has fallen sharply, risks further alienating the South Korean public by moves seen as cozying up to long-time rival Japan.

Yoon, a conservative who took power in May, has advocated a tougher line with China and North Korea -- bringing his country’s security policies in greater alignment with those of the US and Japan. In his Liberation Day speech, he called on North Korea to make “genuine and substantive process for denuclearization,” offering food, energy and infrastructure aid if it does.

Yoon’s government has said the possible operation of a American-made missile shield that raised the ire of China was “not negotiable,” pushing back at Beijing’s efforts to hold him to Moon’s policy to freeze its deployment.

Decisions on the deployment of Lockheed Martin Corp.’s Terminal High-Altitude Area Defense system was a matter of South Korea’s self-defense, a senior presidential official told reporters last week in Seoul. The Yoon administration is accelerating efforts to “normalize” the operation of the US base in the southern city of Seongju that deployed the Thaad system, the official said.

Meanwhile in Japan, two cabinet ministers and a top official of the ruling Liberal Democratic Party visited Yasukuni Shrine on Monday. Economic Security Minister Sanae Takaichi, Reconstruction Minister Kenya Akiba and LDP policy chief Koichi Hagiuda paid their respects at the site, where 14 Class-A war criminals are enshrined along with other war dead. The shrine is seen by victims of Japan’s imperial army as a symbol of the country’s past militarism.

Prime Minister Fumio Kishida sent an offering to the shrine but did not visit in person.

South Korea expressed “deep disappointment” over the officials paying tribute at Yasukuni, its Foreign Ministry said in a statement, adding the site is where “Japan’s past wars of aggression, as well as war criminals are glorified.”

Chinese Foreign Ministry spokesman Wang Wenbin said Beijing has made solemn representations to the Japanese side through diplomatic channels. It also urged Japan to learn lessons from history, make a clean break with militarism, and avoid further losing trust of its Asian neighbors and the international community, Wang said at a regular briefing in Beijing.

(Updates with details on visits to Yasukuni Shrine.)