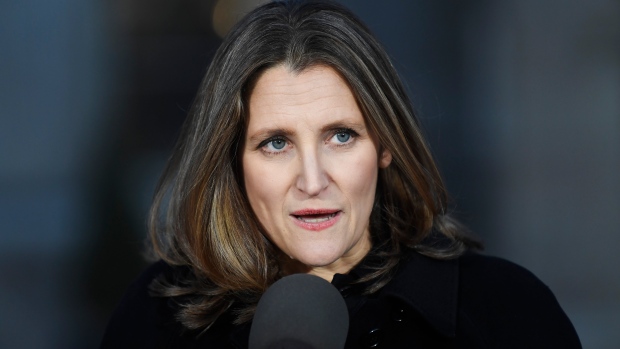 “My team and I were tracking it in real time; and, to be frank, markets don’t like it.” That was the opening salvo from BMO Global Asset Management Head of Fixed Income Earl Davis a short time after Deputy Prime Minister and Finance Minister Chrystia Freeland took the wraps off a budget that includes $101 billion in stimulus spending over the next three years, no roadmap for balancing the books, and a debt-to-gdp ratio that hovers around 50 per cent over the forecast horizon. Freeland defends her plan by essentially saying it’s the responsible (and affordable) thing to do given the times. We’ll continue stress testing that, including with the likes of David Rosenberg and iA Financial Chief Economist Clément Gignac this morning on The Open.

That was the key takeaway from former Deputy PM and Finance Minister John Manley as he learned of the budget details on BNN Bloomberg yesterday afternoon. The question is whether it will all add up to a stronger, more productive economy. From the centerpiece of $30 billion to help get an affordable national childcare program off the ground, to extensions for key COVID emergency and recovery programs, to nearly $20 billion in spending on a so-called green recovery, and new supports for entrepreneurs. What does it all add up (figuratively speaking)? We’ll keep gathering insight from key stakeholders.

From cigarettes, to luxury yachts, to Big Tech, to a clampdown on interest deductions for businesses, there’s a grab-bag of revenue-generating announcements from the federal government. And, in a budget that steered clear of any big move to tame runaway home prices, there’s a new 1 per cent annual tax on foreign-owned vacant homes. Can’t help but wonder whether that can possibly be a deterrent considering recent astronomical price growth. And then there’s the question of what comes next. As BMO’s Earl Davis put it: the Feds will “have to” bring in additional tax measures next year to help pay for this year’s spending spree.

Canadian National Railway is ready to go toe-to-toe with Canadian Pacific Railway over Kansas City Southern. It unveiled a US$325/share cash-and-stock offer for KCS this morning, with its chair describing the move as being “far superior” to CP’s friendly US$275/share deal. Opens the door to bunch of questions: how far are the two giant Canadian rail companies prepared to go in a bidding war? How will Kansas City Southern management respond? What’ll top shareholders from the three companies have to say? What’s the strategic fit for CN? We’ll watch for developments and chase reaction. CN didn’t immediately respond to our request for comment.

Quite an anniversary in the energy market. Kudos to our Bloomberg partners for noting that it was one year ago today when West Texas Intermediate crude prices collapsed into negative territory.

SNC-Lavalin could be a stock to watch today after saying the World Bank has moved early in lifting sanctions against the previously controversy-plagued engineering and construction firm – meaning SNC can again bid on projects backed by the World Bank and a number of international development banks.

While Canada was in budget mode yesterday, tobacco stocks were getting walloped after The Wall Street Journal reported the White House might mandate nicotine levels “at which they are no longer addictive.” In a snapshot of reaction: Altria shares closed more than 6 per cent lower yesterday and are extending losses this morning.

Crypto investors are getting something new to choose from today in Canada, with the CI Galaxy Ethereum exchange-traded fund making its debut on the Toronto Stock Exchange, carrying a management fee of 0.4 per cent. Check out more on the fee war amid an Ether ETF frenzy here.

IBM managed to eke out top line growth in its first quarter, powered by a 21 per cent surge in revenue from all cloud-based business lines. Shares are rising in pre-market trading.