Zuckerberg believes Facebook can withstand the impact of the ad boycott and he's right: Croxon

Facebook and Google have for years operated like shop windows for news stories, plying their billions of visitors with free snippets and information from articles across the web. An antitrust tussle that’s coming to a head in Australia is set to change that.

Australia’s competition regulator will this month publish draft rules forcing the two U.S. tech giants to share revenue generated from news with the original publishers, including Rupert Murdoch’s News Corp. A final version of the code, the first of its kind in the world, is due to follow soon after.

Between them, Facebook Inc. and Alphabet Inc.’s Google have a dominant position in the online advertising market and that has been under intensifying regulatory and political assault in the U.S. and Europe, with Australia now adding another front of attack.

Investors are sitting up, too. Should watchdogs in other markets follow Australia, it would chip away at two of the most wildly successful business models of the 21st century, built largely on content free-for-alls. Facebook and Alphabet have combined market values in New York of about US$1.7 trillion.

“This would be a major shot across the bow from a regulatory perspective,” said Dan Ives, an analyst at Wedbush Securities in New York. “It could open up a Pandora’s box around monetization and sharing of data.”

In an interview, Australian Competition & Consumer Commission Chairman Rod Sims said he knows of several counterparts overseas who are considering taking similar steps. With traditional media hemorrhaging jobs and facing an assault from populist politicians alleging fake news, the 69-year-old is swinging the pendulum back in the publishers’ favor. To Sims, it’s about more than simply forcing businesses on his beat to play fair.

“This one matters because journalism matters,” he said. “The fourth estate is such a fundamental part of what makes our societies work.”

Traditional media companies have long complained their content is being exploited by digital platforms without due compensation. But that’s only part of the picture. 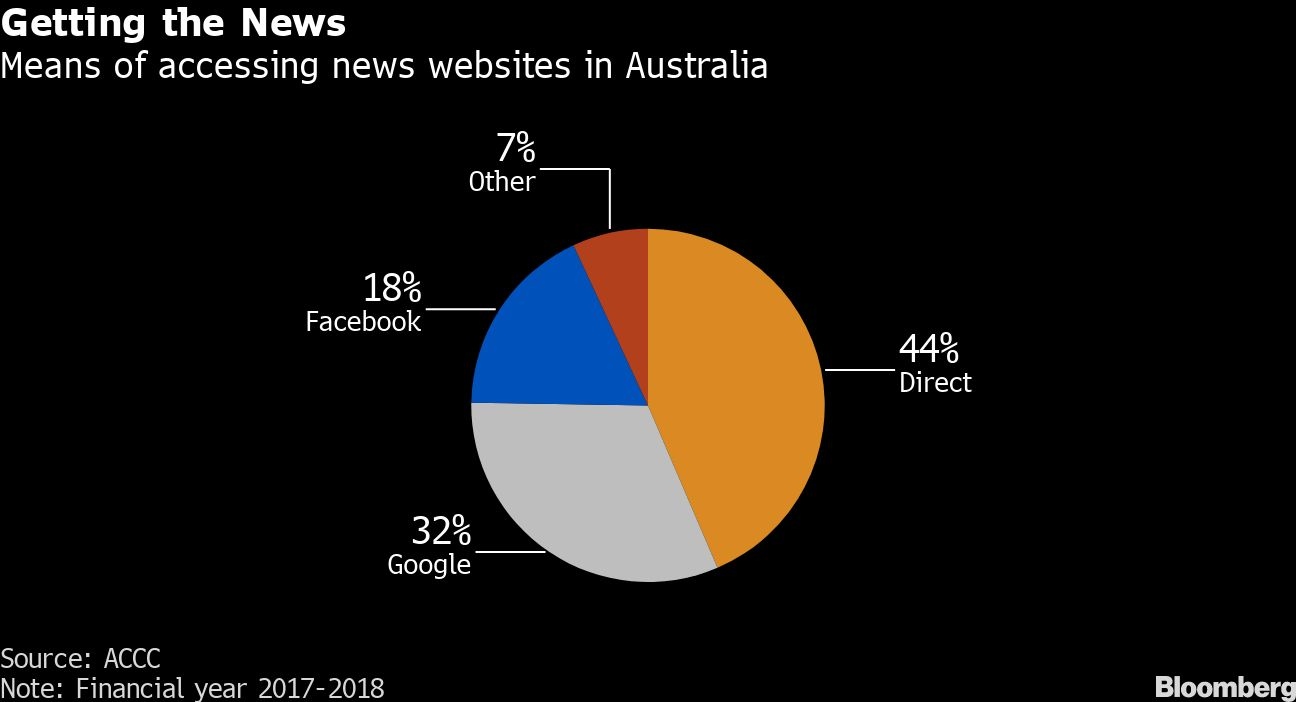 While platforms and publishers all compete for web clicks and eyeballs that can be turned into advertising revenue, they’re also allies of sorts. News stories, or even just links to them, are part of the appeal of Facebook and Google, helping them keep visitors engaged and vacuum up more data. The tech giants, in turn, direct traffic back to the publishers’ websites.

The nature of this relationship is central to the crackdown by Australia’s competition watchdog. “There’s no doubt the net value flow is to the platforms,” said Sims. Facebook has called such an assumption “fundamentally incorrect.”

In a 58-page submission to the ACCC last month, Facebook described news as “highly substitutable” content. Even a complete purge of stories in Australia, Facebook said, would make little difference. “News does not drive significant long-term commercial value for our business,” it said.

At Google, only a “very small” direct and indirect economic value comes from news in Google Search, Australia Managing Director Mel Silva said in a May blog post. Meanwhile, Google Search accounted for 3.44 billion visits to Australian news publishers for free in 2018, she wrote.

Amid the dispute, it’s not clear what the code will cost the tech giants in Australia. That’s partly because in between the baby pictures and community group posts on Facebook, it’s almost impossible to quantify the subjective appeal of news. “I would say #goodluckregulators,” Rich Greenfield, an analyst at New York-based research firm LightShed Partners, said in an email. “I have no idea how they will determine the value.”

Even Sims warns it will be “extremely hard,” but says “there are always ways to put numbers around things.” And in recent months, publishers appear to have gained ground in the argument.

In April, France’s antitrust regulator ordered Google to pay media companies to display snippets of articles. Then in June, Google said it would pay certain media outlets it will feature in a yet-to-be-released news service in Germany, Australia and Brazil. Terms weren’t disclosed.

Perhaps most significantly, Facebook late last year introduced a separate news section, paying the publishers whose stories were featured. Some 200 publishers were involved in the Facebook News service, some of them receiving between US$1 million and US$3 million a year to put articles in the section.

The ACCC’s mandatory code goes further: the watchdog’s concepts paper raised the possibility of collective media boycotts of Facebook and Google in the absence of “appropriate remuneration.”

In a statement, Google said it has “worked closely and constructively with news media businesses, the ACCC and the government as part of this process and will continue to do so.”

Facebook “will continue to work closely with news organisations, the ACCC and the Australian government to sustain a strong news ecosystem,” said Mia Garlick, the company’s director of policy for Australia and New Zealand. But she said: “A regulatory approach that lumps two tech companies together and benefits only the most powerful publishers does not do that.”