With Europe expected to lead the world in electric-car sales for a second straight year, an epic rush to build a battery-supply chain from scratch is playing out across the continent.

After years of ceding the EV battery business to foreign companies, Europe wants in. Prospective manufacturers are popping up in the Nordic region, Germany, France, the U.K. and Poland in a transcontinental competition to chip away at the dominance of China’s Contemporary Amperex Technology Co. Ltd. and South Korea’s LG Energy Solution.

Fueled by state support of at least 6.1 billion euros (US$7.3 billion) and investment plans totaling 10 times that in just one year, the race is on for a regional champion to emerge. The contestants include startups Northvolt AB in Sweden, Britishvolt Ltd. and France’s Automotive Cells Co., and powerhouses Tesla Inc. and Volkswagen AG. BloombergNEF estimates the continent could see its share of global battery production rise to 31 per cent by 2030 from just 7 per cent last year.

Sefcovic estimated the planned investments just for 2019 to be about 60 billion euros (US$71 billion), triple that being spent in China. Those eye-watering totals cover the entire supply chain, from materials and cells to assembly and recycling. 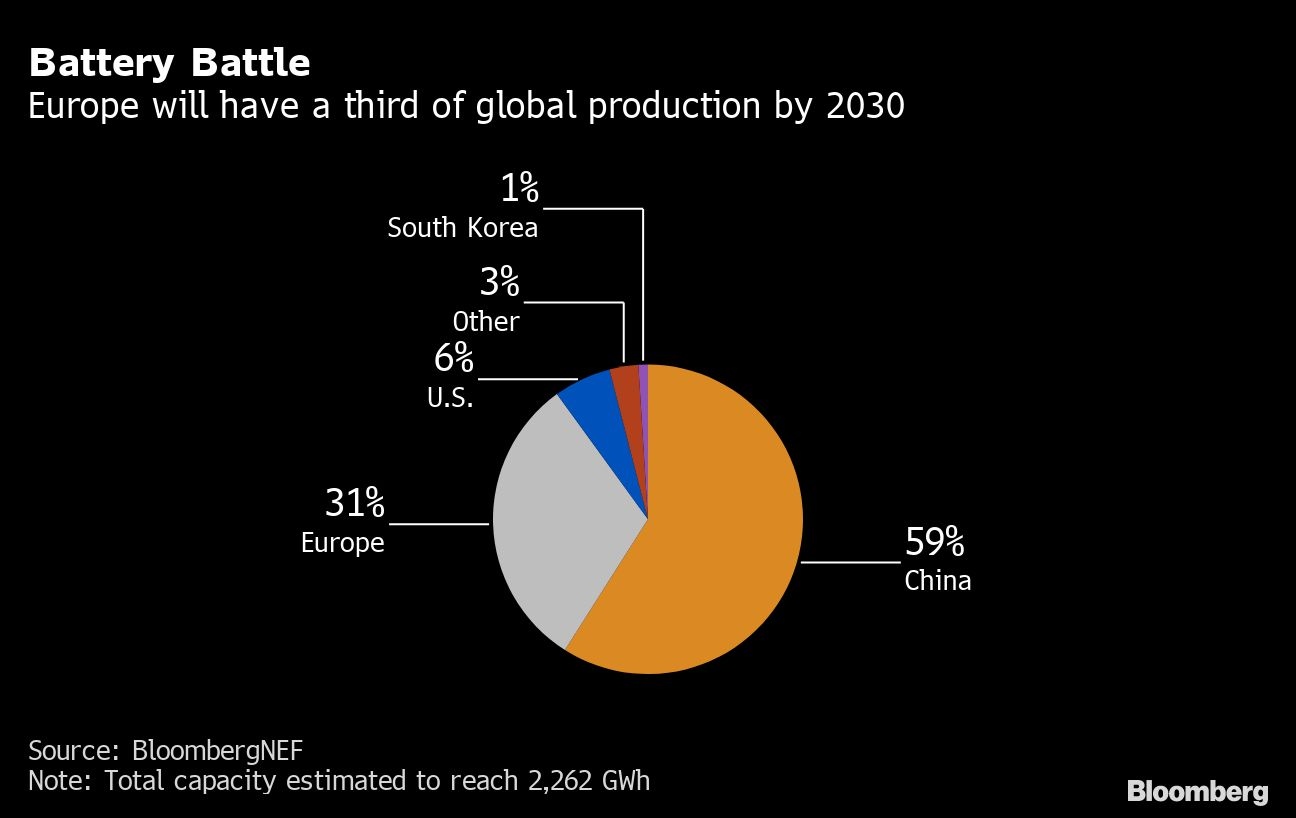 Amid tougher emissions rules and fines for violating them, sales of EVs -- both battery-electric and plug-in hybrid models -- in Europe more than doubled last year to about 1.3 million units, topping China for the first time.

That could reach 1.9 million this year as VW, Stellantis NV and BMW AG map out plans for new models and higher output, and Ford Motor Co. and Volvo Cars commit to going almost all-electric.

Those ambitions will require a lot of power packs, and the local auto industry’s reliance on overseas suppliers grates on political leaders in Germany, France and Brussels. They are loathe to have local automakers, which are major employers, be reliant on battery makers based outside the region.

The clamber to build up local supply chains is palpable. Traditional car-making countries Germany, France, Italy and the U.K. are especially keen to stay competitive in battery technology and maintain their manufacturing bases. Germany is elbowing its way to the front of the pack, committing as much as 2.6 billion euros to the battery business and luring Tesla, CATL, LG Energy and ACC to set up shop there.

There are plans for 27 battery-producing sites across the region that could churn out least 500 gigawatt-hours of cells this decade, he estimated. 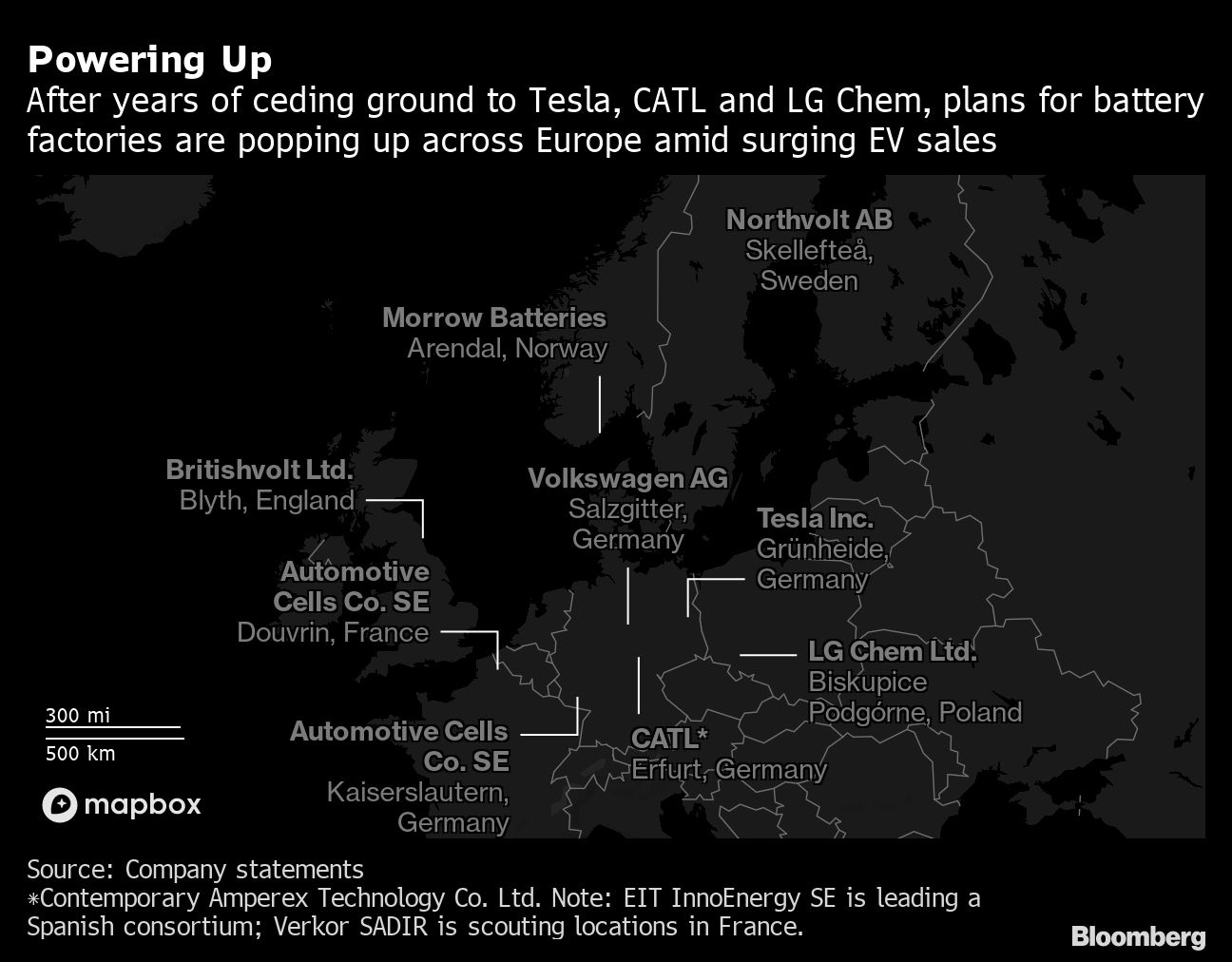 VW made a massive bid for the pole position last month by unleashing an estimated US$18 billion plan for six battery factories in Europe -- including one in Salzgitter, Germany -- and to expand its network of fast-charging stations.

If all goes as intended, the German automaker and partners could leapfrog challengers and become the world’s No. 2 cell producer behind CATL, according to BNEF.

“Automakers are realizing they would lose out on a lot of added value, so they want to re-appropriate the manufacturing process,” Corniou said.

The European Commission set a target of getting at least 30 million zero-emission cars on the roads by 2030, and the ambition is that European factories would cover more than 90 per cent of the demand for batteries.

VW will plug its own packs into its own cars, leaving wide-open lanes for competing battery makers to nab customers. European automakers are under pressure to meet stricter European Union emissions rules, and consumer spending is expected to explode as nations emerge from COVID-19 lockdowns.

Battery demand is forecast to be so strong that production barely will keep pace by decade’s end, according to UBS Group AG analysts.

So the market is there. Yet it won’t be easy for the startups to catch CATL, Panasonic Corp. and LG Energy, all of whom spent years honing operations in Asia and the U.S. before moving into Europe.

CATL, the largest producer of rechargeable cells, will invest 78 billion yuan (US$12 billion) to add about 230 gigawatt-hours of capacity worldwide within the next four years. The Ningde, China-based company supplies almost every major global EV brand, and it’s scheduled to start producing in Germany this year. 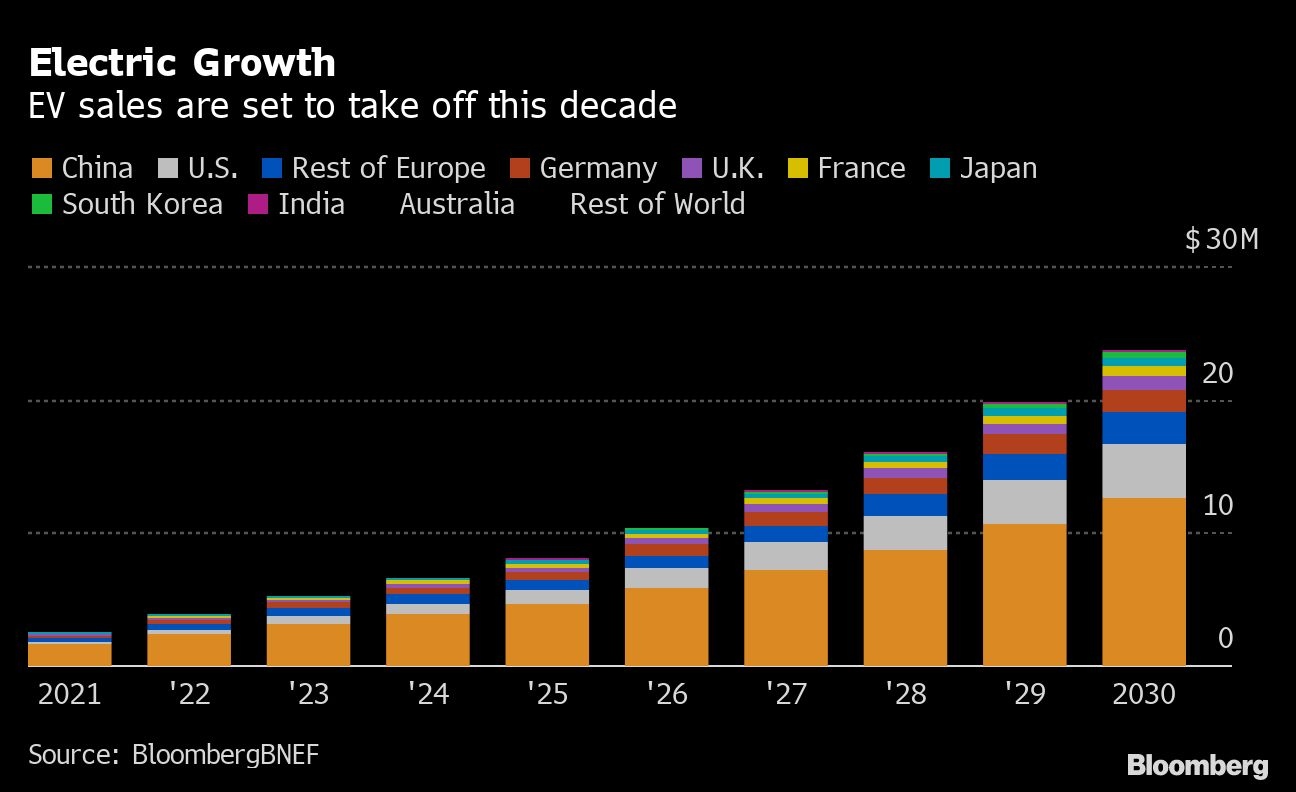 And then there’s Elon Musk. Tesla is the biggest EV maker, selling about half-a-million cars last year, and plans to assemble Model Ys and batteries in Germany to juice its European expansion.

Musk’s operations are becoming a magnet for EV suppliers and triggering a local industrial renaissance. That expertise is daunting for competitors, said Isobel Sheldon, chief strategy officer for Britishvolt.

“Tesla is the biggest thorn in the side for the European EV-manufacturing base,” she said.

When it comes to the startups, Northvolt -- founded by former Tesla executives -- is years ahead of rivals.

The company has a US$14 billion supply deal with VW and another with BMW AG, and is preparing to churn out cells by year’s end at its Skelleftea site. Northvolt wants to grab 25 per cent of Europe’s battery market by 2030, Chief Executive Officer and founder Peter Carlsson has said.

That was before the VW offensive. Automakers “are putting more and more efforts behind their electrification plans and have revised their battery needs upwards,” said Jesper Wigardt, a Northvolt spokesman. “We will need to evaluate our target continuously.”

Britishvolt plans to start building a 2.6 billion-pound (US$3.6 billion) factory in northeast England later this year. The site will use hydropower from Norway, as well as wind power from the North Sea, and could be online by 2023.

The Blyth-based startup is in talks with EV makers in the U.K., EU, U.S. and Japan, she said without elaborating.

Further behind -- but flush with public funds for development – is a joint venture between Stellantis and oil giant Total SA. Instead of starting from scratch, ACC plans to hasten expansion by producing batteries at two former car-parts plants.

“Europe isn’t too late,” said Corniou, the SIA consultant. “The market will be colossal, and there’s a need for competitive technology.”

--With assistance from Eddie Spence and Niclas Rolander.