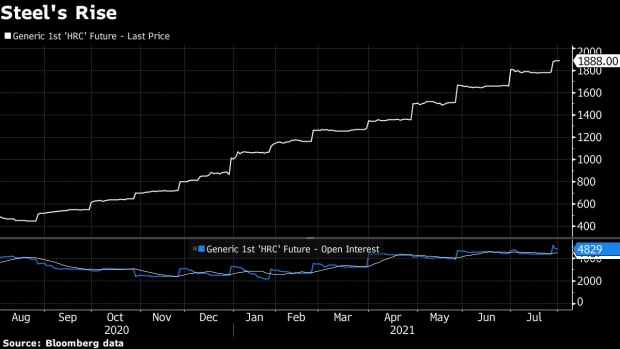 (Bloomberg) -- A Senate plan to spend $550 billion on U.S. infrastructure stands to benefit industries heavily dependent on transportation, with companies including Amazon.com Inc., FedEx Corp. and Comcast Corp. among the biggest winners.

Senators are debating the legislation after reaching agreement over the weekend on final text, and expect to vote on it as soon as this week, setting up action by the House on the measure after they return from a break in September.

While freight haulers, airlines and internet suppliers will be among those getting a boost, the cryptocurrency industry, drugmakers and owners and manufacturers of electric vehicles came up short in the 2,702-page bill.

The legislation represents the federal government’s biggest public works spending spree in decades and would be a major milestone for President Joe Biden’s agenda. It also follows on the $1.9 trillion Covid-19 relief bill passed in March.

Here are some of the sectors that will see an impact for better or worse from the bill:

Amazon, FedEx and United Parcel Service Inc, are among heavy users of the roadways that would benefit from a roughly $110 billion investment to improve the nation’s roads and bridges. The companies, along with hundreds of other corporations using the highway system, benefit directly without having to shoulder the cost of the investment from a corporate tax increase or gas tax hike, which Republicans and Democrats agreed to keep out of the deal.

American Airlines Group Inc., Delta Air Lines Inc. and Southwest Airlines Co. would benefit from approximately $25 billion the bill provides for airport upgrades and plans to reduce emissions and congestion. Similar to the roadway users, they won’t directly pay for the cost of those repairs. The plan also includes $66 billion for Amtrak to upgrade their Northeast corridor lines, as well as new investments in tracks in other portions of the country and high-speed rail.

All those roads, bridges, pipes, electric wires and rails will need an enormous amount of steel, cement, aluminum, copper, with metals industry groups among those lobbying for passage. Prices for many of these commodities have already skyrocketed this year, including steel.

Broadband providers such as Comcast Corp. and Charter Communications Inc. emerged as winners from the infrastructure negotiations, as senators declined to endorse pouring U.S. subsidies to places where companies already built networks, a move that could have spurred more competition. The bill sends U.S. subsidies to places lacking rudimentary service. In addition, the bill seems set to bring more customers to broadband providers because it extends an emergency broadband program that helps consumers pay for service.

The bill also requires providers to offer a low-cost broadband option but includes language prohibiting the government from setting rates. Large providers already offer such programs. Analysts have offered differing takes on the provision, ranging from no material impact on providers, to a possible risk if the Biden administration seeks to make sure the cheap packages are available to more customers.

Struggling nuclear power reactors would get a $6 billion lifeline under the bill, a boost that could help prevent plant closures in the face of competition from cheaper electricity produced using natural gas, and, increasingly, renewables. The assistance could be a boon for operators such as Southern Co. and Exelon Corp., as well as for uranium miners like Lakewood, Colorado-based Energy Fuels, Inc.

Alaska and West Virginia, represented by crucial negotiators behind the bipartisan package -- Republican Senator Lisa Murkowski and Democratic Senator Joe Manchin -- are among the states which would benefit from specific provisions added to the deal. The bill authorizes federal spending for an Alaska highway, and provides money for energy transmission upgrades, among other provisions. West Virginia would benefit from $1 billion for the Appalachian Regional Commission, a group co-chaired by Gayle Conelly Manchin, the wife of Joe Manchin. Billions more would go to other programs particularly beneficial for West Virginia, like cleaning up abandoned mines.

West Virginia and Alaska have a long history of success in drawing government spending by dint of being represented by highly influential senior lawmakers. The late Senators Robert Byrd of West Virginia and Ted Stevens of Alaska were legendary for bringing federal projects to their largely rural and sparsely populated states.

The infrastructure package will delay a Trump administration regulation that sought to curb the use of drug rebates, money refunded to pharmacy benefit managers from manufacturers often in exchange for preferred placement on a health plan’s formulary. CVS Health Corp., Cigna Corp., and UnitedHealth Group Inc. are among the largest benefit managers in the country.

The deal largely steered clear of tax hikes, the result of a political compromise between Democrats who didn’t want to increase the gas tax and Republicans who didn’t want corporate tax hikes. The new revenue to fund the bill comes from the legislative equivalent of raiding Congress’s couch cushion for money. It isn’t a long-term solution for continued investment and some of the payfors may not end up covering the total cost of the bill.

The bill would increase IRS surveillance of cryptocurrency transactions, which the Joint Committee on Taxation had estimated would raise $28 billion over a decade. Industry groups had lobbied hard against the provision, arguing it might be impossible to comply with. In an effort to increase tax compliance, the bill would require more companies to report digital asset transactions to the IRS. The problem, according to industry groups, is that some companies that would seemingly fall under the new law, such as cryptocurrency miners, don’t have the technical capability to collect the information they’d be asked to report.

Electric vehicles and charging stations would get a modest investment in the legislation, but far less than the $174 billion that Biden had proposed earlier this year. The legislation includes $7.5 billion for chargers, which would add more locations for electric car owners to recharge while roaming the country, plus another $2.5 billion for electric buses. Electric vehicles could still see a more massive investment later this year in a Democrats-only bill to invest trillions in energy and the economy, paid for by tax increases on the wealthy and corporations.

One of the few tax increases in the bill is the re-reinstatement of the Superfund polluters levy, a tax on chemical companies to clean up hazardous waste sites. It is estimated to raise $14.5 billion over a decade. The tax was created in 1980 and expired in 1995. This plan would impose the tax through 2031.

The infrastructure package also contains a provision that would require drugmakers to refund Medicare for drug waste, medicine that’s discarded by doctors due to over-packaging. In 2019, Medicare paid more than $752 million for drugs that were discarded, according to government data. Drugs made by Amgen Inc., Celgene Corp., and Bristol-Myers Squibb Co. contributed to more than $150 million of that waste, according to the data.

Missing from the bill is $8 billion in tax credits for clean-energy manufacturers that had been a priority for Manchin and the Biden administration. The credit, which can be used by manufacturers of wind turbines, solar panels, geothermal energy equipment, fuel cells, electric cars, electricity grids, was touted by its backers as a way of creating a national clean energy manufacturing base in America. It made an appearance under the first Recovery Act under then President Barack Obama, but the $2.3 billion allocated for it was quickly used up.