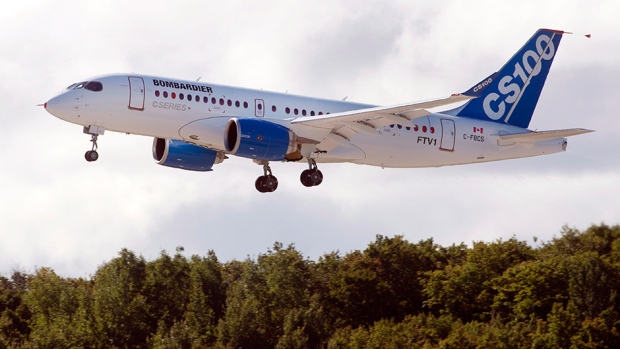 The U.K. is said to see Canada as primarily responsible for the trade dispute between Boeing Co. and Bombardier Inc. because of the level of its state aid to the aerospace company.

Publicly, the British government has said that the U.S. imposition of punitive duties on Bombardier (BBDb.TO) is disproportionate, and Prime Minister Theresa May even lobbied U.S. President Donald Trump unsuccessfully to try to prevent it.

Privately, it believes that Canada has overstepped the mark in aid to Bombardier, according to two officials who declined to be named while talking about an ongoing dispute. Bombardier spokesman Simon Letendre declined to comment.

“We will continue to work in close collaboration with our British partners to solve this dispute,” said Adam Austen, spokesman for Foreign Affairs Minister Chrystia Freeland. “We will continue to raise this issue with key members of the U.S. administration, with American elected officials, and with Boeing.‎”

The U.K., which is seeking post-Brexit free-trade agreements with both countries, feels it’s caught in the crossfire. While British officials think Canada has brought the dispute on itself, they don’t want Boeing’s (BA.N) challenge to succeed and want a resolution via diplomatic means.

The face-off poses a dilemma for May on two fronts. At stake are more than 4,000 jobs at Bombardier’s plant in Belfast, where the CSeries planes’ wings are made, and that strains her alliance with 10 Northern Irish lawmakers propping up her minority government.

It also strains her relationship with Trump, who didn’t come through for her on this issue. She has voiced her disappointment that the U.S. last month slapped preliminary duties of 220 per cent on Bombardier’s marquee jetliner after the Commerce Department concluded the Canadian manufacturer received unfair government subsidies.

She even went so far as to say the U.K. might not consider Boeing for future contracts, but that might turn out to be an idle threat as there are thousands of jobs also tied to the U.S. aircraft maker. Of the 220 per cent subsidies identified by the U.S., 200 per cent was due to Canada, one of the British officials said.

Bombardier’s case rests on the fact the government of Quebec’s aid package was not a subsidy -- but rather a direct investment in the CSeries program. In exchange for a $1 billion cash infusion, the province received a 49.5 per cent stake in the C Series.

The U.S. Department of Commerce’s preliminary determinations almost always rule in favor of the U.S. complainant, according to Austen, who added that Boeing’s petition is “clearly and unfairly aimed at eliminating Bombardier’s CSeries aircraft from the U.S. market.”

Canada’s federal government also helped out Bombardier by agreeing to provide $372.5 million in repayable contributions for two of the company’s jet programs -- the CSeries and the Global 7000 business aircraft, which is still under development. The federal funds are interest-free.

Both Canada and the U.K. have pointed out that more than half of the Bombardier plane’s components are made in the U.S., supporting 22,000 American jobs. Bombardier is the largest manufacturing employer in Northern Ireland, the poorest of the U.K. regions.

Boeing, for its part, has pointed out that it supports more than 18,700 British jobs either directly or though its supply chain. The company also last month began building a factory in Sheffield, northern England, its first in Europe.

A final determination on the so-called countervailing duties is due in December. The Commerce Department is expected to decide by Wednesday whether to also impose anti-dumping duties on the CSeries.

On that matter, Boeing is seeking duties of about 80 per cent. The trade penalties could be reversed by the U.S. International Trade Commission if the tribunal determines that Boeing wasn’t injured by Bombardier’s jet program. That decision is expected to be made next year.