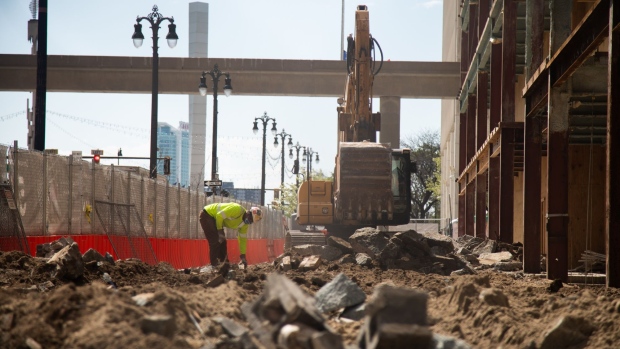 Construction resumes on a building off of Woodward Avenue in Detroit, Michigan, U.S., on Thursday, May 7, 2020. , Bloomberg

WASHINGTON - U.S. construction spending fell 2.9 per cent in April, the largest drop in 18 months, with broad declines across all building activity as shutdowns hobbled projects and workers were told to stay home.

The Commerce Department said that the April decline was the biggest monthly drop since a 3 per cent fall in October 2018. It followed a basically flat reading in March.

Spending on residential construction dropped 4.5 per cent in April with single-family construction down 6.6 per cent and the smaller apartment segment down 9.1 per cent

Construction of nonresidential projects fell 1.3 per cent with office buildings, hotels and the sector that includes shopping centres all down.

Spending on construction by the federal government and state and local governments was down 2.5 per cent in April

There is hope that with government stay-at-home orders being lifted, construction activity may rebound. However, many economists are worried that the recovery from the sharp recession which has seen millions of workers lose their jobs may take a good deal of time.

Nancy Vanden Houten, an economist with Oxford Economics, said that she expected a steep drop in construction spending in the second quarter followed by a slow recovery that will be held back by budgetary pressures.

“Public construction, dominated by state and local governments, will likely be depressed as budgets are devastated by the pandemic,” she said.