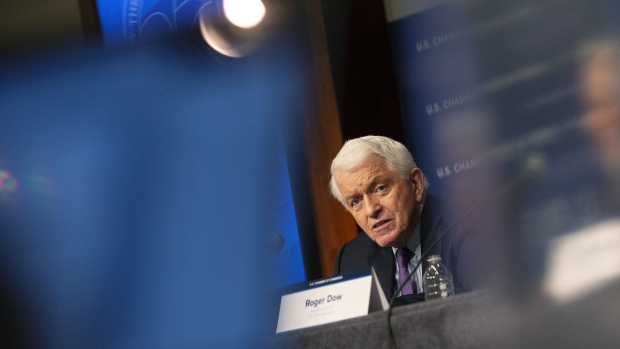 The head of the largest business lobby in the U.S. condemned President Donald Trump on Tuesday for encouraging a mob of supporters who stormed the U.S. Capitol last week.

“The president’s conduct last week was absolutely unacceptable and completely inexcusable,” said Tom Donohue, chief executive officer of the U.S. Chamber of Commerce, escalating criticism of Trump from the business community. “He has undermined our domestic institutions and our ideals.”

The lobby group’s chief policy officer, Neil Bradley, also warned that the chamber would withdraw support from some lawmakers who opposed certifying President-elect Joe Biden’s election win. “There are some members who by their actions will have forfeited the support of the U.S. Chamber of Commerce, period, full stop,” Bradley said at a press conference. He declined to identify the members of Congress.

Eight senators and 139 House members voted to contest Biden’s Electoral College victory even after the riotous attack on the Capitol.

Donohue, who has led the chamber since 1997, earlier used his annual speech on the “State of American Business” to call on Biden to undo the Trump administration’s immigration policies. He also said Biden should end Trump’s tariffs, confront China alongside allies and work through multilateral groups such as the World Health Organization.

At the same time, Donohue urged Democrats assuming power in Washington not to pursue tax increases or new regulations. “Now is exactly the wrong time to further test the resiliency of businesses by hiking taxes or heaping on new regulations that do more harm than good,” said Donohue, referring to the Covid-19 pandemic in a virtual address from the group’s marble headquarters near the White House.

Once a pillar of the Republican Party, the chamber parted ways with the GOP during Trump’s tenure on several fronts. Now that the chamber faces an imminent shift in power to Democrats, Donohue on Tuesday signaled how it plans to further adjust its agenda by calling for a more balanced economic recovery.

“Ten million people who had jobs last January don’t have jobs today,” Donohue said. “We won’t restore the jobs growth and prosperity that were lost in 2020 until we eradicate this pandemic and get our economy firing on all cylinders.”

Immigration reform has long remained elusive in Congress, including when Biden was vice president, despite the support from business groups, and Trump took advantage of a populist backlash against those efforts.

Donohue, whose group was one of several in Washington calling for a peaceful transition of power and condemning last week’s attack, called Biden’s win “clear and lawful.”

“Violence has no place in our democracy, no matter where it comes from, who perpetuates it or what motivates it,” Donohue said.

The chamber joins a long list of major U.S. corporations publicly ending support for congressional Republicans who tried to overturn Biden’s electoral victory. The companies vowing to pull their campaign contributions stretch from Wall Street to the Texas oil patch to Silicon Valley.

In recent years, Donohue has used his annual speech to call for tax cuts, deregulation and more spending on public works. He returned to those themes on Tuesday, even as he has attempted to negotiate increasingly turbulent politics.

In his 2019 speech, for instance, Donohue slammed the then-ongoing partial government shutdown. He also urged Trump to abandon tariffs and said his group would take steps to foster bipartisanship by supporting the campaigns of some Democratic lawmakers after years of spending overwhelmingly on Republicans.

The following year, though, he declared the chamber would lead opposition to what he called “policies that undermine the job creators,” particularly those on healthcare and labor coming out of the progressive wing of the Democratic Party.

Now the chamber faces Biden’s incoming administration and a Congress controlled narrowly by Democrats after run-off elections in Georgia flipped Senate control last week. The chamber supported the Republicans in those races.

Donohue’s group has spent much of the last year responding to the economic crisis arising out of the Covid-19 pandemic as Congress scrambled to put together stimulus bills.

The chamber has also urged more government action to support mask-wearing and warned against a recovery that primarily benefits those already doing well in the economy. Donohue called for ongoing relief for businesses in the hopes of a recovery in the third quarter.