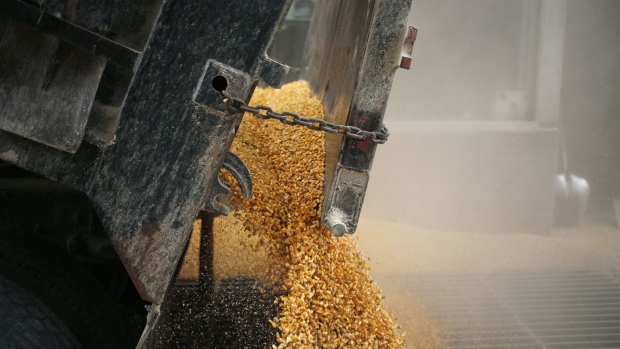 Kernels of corn are unloaded from a truck at the Kokomo Grain Co. Inc. transloading facility in Edinburgh, Indiana, U.S., on Thursday, March 28, 2019. The trade war is having a bigger-than-expected effect on U.S. farmers' planting decisions at a time when silos are bulging with grain stockpiles. May corn futures fell to a record low. , Bloomberg

The Agriculture Department on Monday said farmers planted a bigger corn area than analysts estimated and pegged crop yields that also exceeded expectations, sparking the biggest rout in futures since 2013. That was a blow to growers who were holding back supplies, hoping a rally that started in May due to delayed sowing would extend through the fall.

The decline represents a potential loss of almost US$3.5 billion for U.S. farmers, according to the American Farm Bureau, and is another setback for them after prices fell following the USDA’s previous acreage report, which was widely criticized for containing outdated data.

The latest data is compounding the pain from the trade war between Washington and Beijing, which has significantly reduced purchases from the world’s largest soybean buyer. Policy uncertainty has also hit the farm economy as a new U.S. deal with Mexico and Canada is yet to be passed. What’s more, the government is allowing 31 oil refineries to go without blending ethanol into fossil fuels, hurting demand for corn.

“This is a huge disappointment for farmers that have already been struggling with a lot of uncertainty with this corn crop, trade wars and what have you,” said Tanner Ehmke, manager of the research team at CoBank, a US$138 billion lender to the agriculture industry. “A lot of people were banking on the opportunity to sell at much higher prices. This report now really brings that into question.”

Crashing corn prices are an additional stress for growers facing huge farm debt, which the USDA estimates will rise 3.9 per cent this year to US$427 billion. Last year, farm debt-to-income was at the highest level since 1984.

While farm income remained weak in the second quarter in the tenth district, the pace of declines had slowed partly as the slowest corn plantings on record boosted prices, according to the Federal Reserve Bank of Kansas City.

The USDA pegged planted corn acres at 2.6 per cent higher than expected while yields came in 2.8 per cent above. Growers who were already disappointed by the price declines after the last acreage report had hoped the agency’s rare re-survey of plantings would deliver a number that better reflects one of the wettest planting seasons on record. Soybean acres were below forecasts, though yields were higher.

“I still don’t think anyone has a good, firm handle on acreage yields, and demand, especially not USDA,” said Charles Williams, who farms 13,000 acres with his father and cousin in Marion, Arkansas. “There’s a lot of calendar left to go on this crop, and I don’t know if the market will know what we have until we throw it in a pile, so to speak, at harvest.”

Some growers also questioned the report due to the discrepancy between the figures published by the USDA’s National Agricultural Statistics Service, or NASS, and those by the Farm Service Agency, or FSA.

“We need to disregard this report, we won’t know actual acreage until this winter, I guess,” said Monte Peterson, a farmer in Valley City, North Dakota. “Makes me wonder, if our system isn’t a little broken. Harvested acreage will be a surprise at some point.”

To be sure, some market veterans agree with the USDA acreage forecast. Scott Irwin, a University of Illinois agricultural economist, said President Trump’s trade aid plan may have encouraged farmers to sow more corn since the agency had initially announced payouts would be tied to acreage planted.

Dan Basse, president of AgResource, said the USDA report showed growers took advantage of the rally earlier this year and planted more than the market expected during a window in the first 10 days of June.

Still, lower prices could add to grower stress at a time Farm Aid’s hotline has seen increasingly numbers reaching out on everything from financial counseling to crisis assistance. Angie Setzer, vice president of grain at Charlotte, Michigan-based Citizens Elevator, called on farmers in her Twitter account to reach out to her if they needed anything or “even just a place to vent.”

Concerns about a further squeeze to farmers’ financial health sent shares of tractor makers tumbling Monday, with AGCO Corp. (AGCO.N) down by the most in over a year and Deere & Co. (DE.N) declining by as much as 5.2 per cent.

Lower prices could also push Trump to announce further aid to farmers as he seeks re-election next year. The president has already announced US$28 billion worth of financial help for growers facing lower exports due to trade wars.

“The financial stress is there and this isn’t going to help farmers that are struggling,” CoBank’s Ehmke said, referring to corn’s decline. “Is this going to be the nail in the coffin for the farm economy? I doubt it. Because we keep throwing the kitchen sink at the farm economy and it just keeps hanging in there.”