Issuers across the US$5.9 trillion U.S. ETF industry are racing to win approval for the first bitcoin fund, with one big hurdle standing before them: A regulator whose position right now is anyone’s guess.

Their odds of approval are a complete unknown. The U.S. Securities and Exchange Commission has rejected all previous filings, but since then two bitcoin ETFs launched in Canada, institutional acceptance of cryptocurrencies has snowballed and -- perhaps most importantly -- the regulator’s leadership has changed.

Gary Gensler, the nominee to be next SEC chairman, is known for having a more open stance toward cryptocurrencies. That means hopes are riding high, and applications are piling up even before he’s in place and despite the regulator being unlikely to make big policy changes in his absence.

“These funds are getting their ducks in a row,” said Todd Rosenbluth, director of ETF research for CFRA Research. “They’re getting their paperwork filed, so if or when the SEC does OK a Bitcoin ETF, these asset managers will be ready.”

Despite the shifting landscape, the early applications still look ambitious. U.S. regulators have raised concerns about Bitcoin’s infamous volatility and how that could whipsaw unsuspecting retail investors. There remain worries about manipulation and criminal activity, with the likes of Treasury Secretary Janet Yellen pointing to the threat of terrorist financing.

One particular issue involves last-minute rules proposed by the outgoing Trump administration that would create new requirements for financial services firms to record the identities of cryptocurrency holders. These could have far-reaching consequences for an industry that prizes anonymity, and it remains unclear how the Biden administration will deal with them.

Issuers are pushing on regardless because of the stakes involved, with a potential bonanza on offer for the first to get an ETF over the line.

The Purpose Bitcoin ETF (ticker BTCC) in Canada, the first of its kind in North America, saw more than US$165 million worth of shares change hands at its launch. One day later, just US$14.6 million of shares traded in Evolve Fund Group’s Bitcoin ETF (EBIT) in its debut. 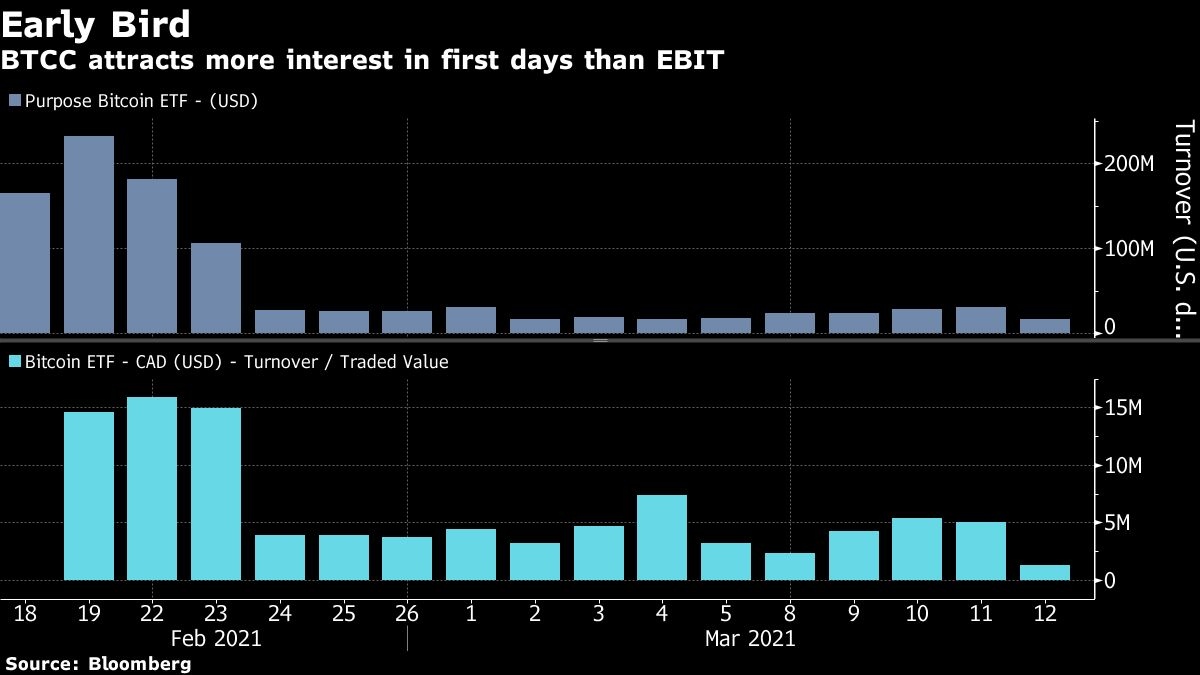 “The difference between being first and second in this two-ETF race hasn’t been so much gold versus silver as gold versus a participation trophy,” said Ben Johnson, Morningstar Inc.’s global director of ETF research.

With Gensler not due to take his position until later in the year, plenty in the industry still think approval is a long way off.

Yet in the past two years the SEC has shown its willingness to work with crypto companies “through guidance, requests for comment, statements and engagement through its innovation arm Finhub,” according to Jackson Mueller, director of policy and government relations at Securrency, a developer of Blockchain-based financial and regulatory technology.

In addition to the four pending applications for a crypto ETF, there are other filings that appear to be seeking to sidestep SEC reticence by combining Bitcoin with other assets.

For example, Simplify Asset Management is working to launch an “equity plus bitcoin” ETF that will invest up to 15 per cent of its assets in cryptocurrencies indirectly through the Grayscale Bitcoin Trust (GBTC). Bitwise Asset Management filed for a fund filled with companies considered to be crypto innovators.

“With Canada recently approving bitcoin ETFs and Gary Gensler poised to serve as SEC Chairman, optimism abounds,” said Nate Geraci, president of the ETF Store, an advisory firm. “Every issuer with any hope of having a meaningful bitcoin ETF presence should be throwing their hat in the ring at this point.”

One of those is arguably Grayscale Investments, the firm behind GBTC. That’s an investment trust as opposed to an ETF, meaning there are different rules around share creation and trading.

Nonetheless, it’s been a smash hit, ballooning in size to more than US$37 billion, up from only US$1.9 billion a year ago. Now Grayscale is recruiting an entire ETF team, apparently in anticipation that the first American exchange-traded crypto products will eventually be approved. 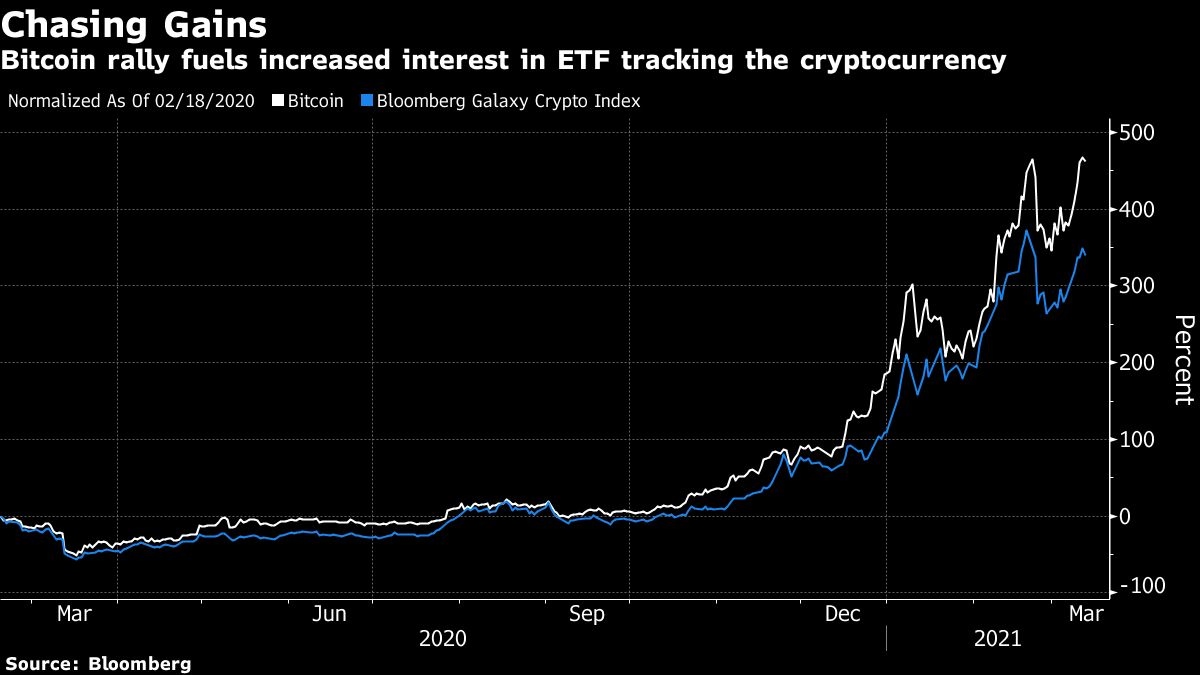 Bitcoin’s price has skyrocketed around 10-fold in the past 12 months. The digital asset climbed above US$60,000 for the first time this weekend before dropping to below US$56,000 by Tuesday morning in New York.

With so much potential cash involved, the SEC should consider approving multiple filings at once to “avoid giving any issuer a significant first-mover advantage,” James Seyffart, ETF analyst for Bloomberg Intelligence, wrote in a recent note.

If that happens, the funds currently trying their luck with applications could be richly rewarded.

“All of these firms want to be at the starting line with their feet on the blocks if and when the SEC pulls the trigger,” said Johnson at Morningstar.