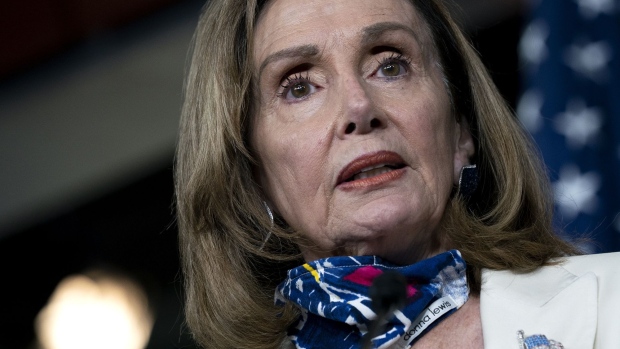 U.S. House Speaker Nancy Pelosi, a Democrat from California, speaks during a news conference at the U.S. Capitol in Washington, D.C., U.S., on Thursday, Oct. 1, 2020. Pelosi told top Democrats Thursday that she’s skeptical of getting a deal for a new economic stimulus in negotiations with Treasury Secretary Steven Mnuchin, according to two House Democratic officials. , Bloomberg

The Trump administration is stepping back from negotiations on a new stimulus package and leaving it to Senate Majority Leader Mitch McConnell to revive long-stalled talks with House Speaker Nancy Pelosi, according to two people familiar with the matter.

While the White House probably would consult with GOP lawmakers on details of a COVID-19 relief bill, it’s now unlikely to take the lead on talks, according to the people, who spoke on condition of anonymity to discuss internal deliberations. The White House would only take over if negotiations have to be restarted completely, the people said.

McConnell’s position on stimulus has been even further from the Democrats’ US$2.4 trillion proposal than that of Treasury Secretary Steven Mnuchin, who had been lead Republican negotiator, leaving low odds of a breakthrough before January. Pelosi and Senate Democratic leader Chuck Schumer reiterated their call for a big package Thursday.

“There’s not been any discussion yet between McConnell and Pelosi, but McConnell is not going to rely on Mnuchin any more to do the dealing,” Senate Finance Committee Chairman Chuck Grassley, an Iowa Republican, said. “I think he is intending to take it over and to try to get something going and get it done.”

President Donald Trump had committed to pursuing a large-scale stimulus after the election, even saying he would approve a US$2 trillion bill, but has since focused on attempting to overturn President-elect Joe Biden’s victories in battleground states.

Federal Reserve Chair Jerome Powell said earlier this month that fiscal stimulus is “absolutely essential” to the U.S. economic recovery. He has also said that even if spending proved more than necessary, it “will not go to waste.”

Mnuchin and Pelosi were at an impasse before Election Day, with the administration proposing about US$1.9 trillion in spending, and Democrats at US$2.4 trillion. A welter of policy issues, from aid to state and local governments to a Republican push for liability protections for businesses, had also prevented a deal.

McConnell has continued to insist on a much smaller package of about US$500 billion, pointing to signs of a continuing recovery including a slide in the unemployment rate. He has also cited encouraging news on a coronavirus vaccine.

“The level at which the economy is improving further underscores that we need to do something at about the amount that we put on the floor in September and October,” McConnell told reporters. Democratic leaders “still are looking at something dramatically larger. That’s not a place I think we’re willing to go,” he said.

His office declined to comment about the White House role in the talks.

Schumer said Thursday that the US$2.4 trillion House-passed bill must be the starting point to any new stimulus talks, reinforcing the stalemate with the Senate.

Pelosi didn’t respond to a question about whether she had spoken to anyone from the administration.

One vehicle for at least some COVID-19 assistance is a vital spending bill that will be needed to avoid the federal government shutting down after Dec. 11, when current funding runs out. House and Senate negotiators are working on an omnibus package that would include appropriations bills for funding through next September.

Senate Appropriations Committee Chairman Richard Shelby, an Alabama Republican, alluded to that possibility Thursday, saying about stimulus spending that “we could wrap it up” in the spending package. But he underscored Republicans’ limited appetite for relief: “we’re not going to do a big big big deal. So, mainly targeted at small business, and you know some people are hurting.”

McConnell said this week he plans to talk to Pelosi about the funding bill soon.