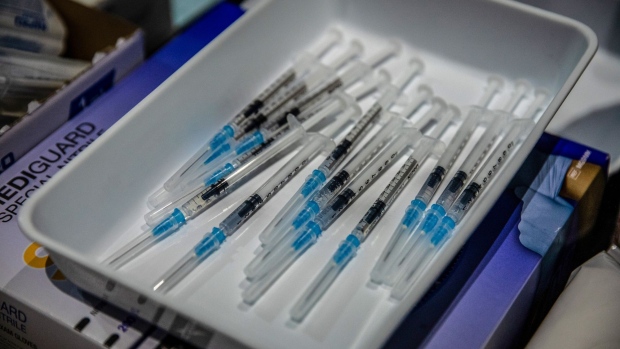 Syringes containing a dose of the Pfizer Inc. and BioNTech SE Covid-19 vaccine ready for administration at a vaccination center inside FC Barcelona’s Camp Nou stadium in Barcelona. , Bloomberg

Zimbabwe published a rule that gives state employees until mid-October to be fully vaccinated against the coronavirus, failing which they will be banned from workplaces without pay.

Civil servants who oppose being inoculated will face “disciplinary proceedings for refusal to obey a lawful instruction,” according to a notice published Friday in the government gazette.

It’s unclear how many of the nation’s more than 300,000 state workers are vaccinated.

An extension to the Oct. 15 deadline will only be granted when there is “a reasonable excuse” why a state worker is unable to receive their shots, according to the regulations. Even then, the state employee will be given until the end of the year to get inoculated.

Progress toward reaching the nation’s goal of vaccinating 10 million people by the end of this year has been slow. Despite procuring 11.9 million vaccine doses since the start of the government’s program in February, only 2 million people had been fully inoculated by Sept. 16, according to the health ministry.