U.S. natural gas collapsed to the lowest level in more than four months as record-high temperatures kill heating demand ahead of winter.

Futures for January delivery plunged 12 per cent Monday, making the commodity the worst performer among U.S.-traded raw materials. Gas has already shed about 40 per cent of its value since October, when traders betting on global fuel shortages drove prices to the highest level in seven years.

Investors have since been forced to unwind some of those bets. While natural gas inventories in Europe and Asia remain strained, fueling higher prices there, unseasonably warm weather in the U.S. has allowed domestic stockpiles to rebound, deflating most of this year’s rally.

In the last seven days alone, more than 4,000 daily records were set for higher-than-normal temperatures. December is expected be the third warmest going back to 1950 based on natural gas consumption, according to Bradley Harvey, a meteorologist at commercial forecaster Maxar. Temperature could reach 61 degrees Fahrenheit (16 Celsius) in New York and 81 degrees in Houston this week, according to the Weather Channel. 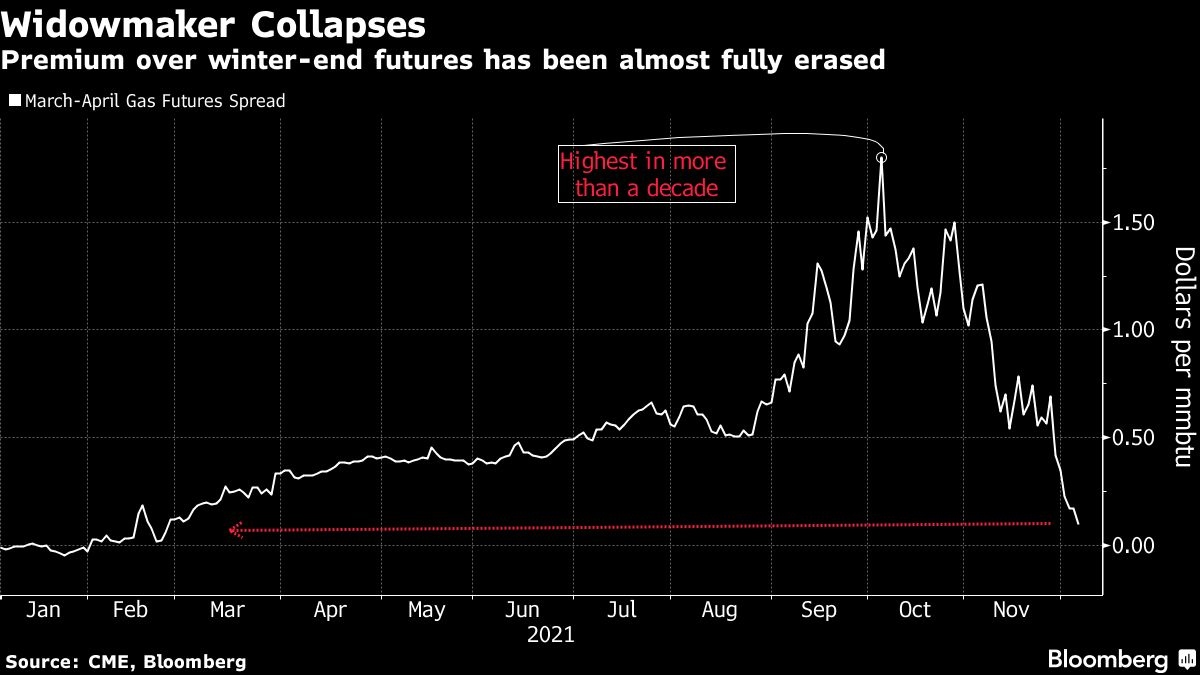 In one sign of how supply fears have eased, the price premiums traders added to winter contracts have been almost completely erased. The so-called “widowmaker” spread between March and April futures, essentially a bet on how tight inventories will be at the end of the northern hemisphere’s winter, narrowed to as low as 3 cents after surging to US$1.90 per million British thermal units in early October.

“The widows of the market are those who went along expecting a really strong winter demand,” said Gary Cunningham, director of market research at Tradition Energy. “We’re just not seeing it right now.”

Losses in the spring and summer futures have been much less severe. Gas for August delivery dropped 7 per cent Monday and is down by 18 per cent from a Nov. 26 high.

“Summer is very close to trading over winter before summer even starts,” Bob Yawger, head of the futures division at Mizuho Securities, said in an email.

The slump has been exacerbated by sales automatically triggered after prices dropped below certain price levels, including the 200-day moving average for January delivery at US$4.15 per million British thermal unit. The 14-day Relative Strength Index for the fuel stood at 32.8 on Monday, still above the level of 30 that typically suggests securities are oversold.

Fears that the spread of the omicron variant will trigger further restrictions have also weighed on gas prices, Cunningham said.

Hedge funds have slashed their bullish natural gas bets to the lowest level since June in the week ended Nov. 30, the latest data from the U.S. Commodity Futures Trade Commission show