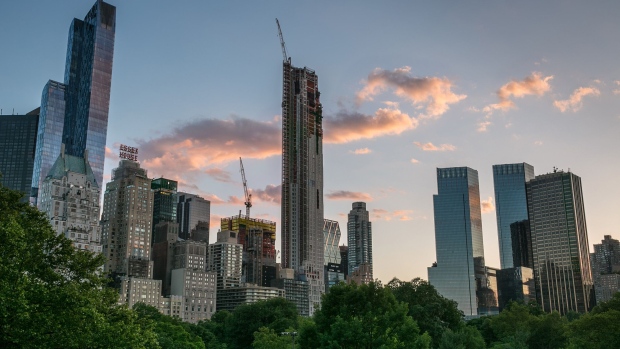 But don’t be surprised next year to spot the world’s wealthiest people beginning to spend money again as home prices in relatively stable economic areas continue to sink into bargain territory.

In a few cities, prices are even set to rise, according to global property consultancy Knight Frank.

Paris leads the agency’s 2020 forecast, with a  seven per cent luxury price increase, followed by Miami and Berlin, where luxury units are also relatively affordable and in short supply.

Political and economic question marks still abound, from trade wars to next November’s U.S. presidential election. And taxes on the rich instituted by cities such as Vancouver, London, and New York will continue to weigh on sales, says Kate Everett-Allen, a Knight Frank partner in London.

“Most markets will still see prime prices increase but by smaller margins than previously,” she says.

New York City prices will fall three per cent next year, a continuation of this year’s trend. (In the third quarter of 2019, prices were down 4.4 per cent from the same period the previous year, according to Knight Frank.) To sell all the newly built condos in Manhattan at the current sales pace, it would take nine years. And the uncertainty of the presidential election will likely keep buyers on the sidelines, according to Jonathan Miller, president of appraiser Miller Samuel Inc.

Demand has also slipped because real estate investors have fled the market, spooked by a legislative environment that’s targeted them via more onerous rent regulations and an increased mansion tax, which leaves buyers of luxury property with higher closing costs.

“The luxury market on the sales side is the weakest segment of the housing market,” Miller says.

And without foreigners, Vancouver’s stuck, too

Sellers of pricey properties in Vancouver next year will likely still be feeling the hangover from the drawback of Chinese buyers and foreign buyer tax measures that were introduced in 2016 to cool runaway prices. Luxury values in the city will fall five per cent next year, according to Knight Frank’s forecast.

On the positive side, there’s a new opportunity for domestic buyers, says Kevin Skipworth, partner and managing broker with Dexter Realty in Vancouver.

“The government has put properties on sale for those who otherwise couldn’t afford it,” he says, meaning that the tax has effectively made high-end properties cheaper for locals.

The political unrest in Hong Kong has hurt the luxury market, but it’s still unlikely to crash in 2020, according to Knight Frank, which projects a two per cent drop for luxury prices next year.

Philip White, president and chief executive officer of Sotheby’s International Realty, says buyers are putting purchases on hold while they watch to see what happens with the pro-democracy protests. In the meantime, they’re starting to look for opportunities elsewhere in cities such as in Vancouver, Los Angeles, San Francisco, and London.

“Real estate buyers look for a stable political system, and they’re not finding that right now in Hong Kong,” he says.

Miami will have a comeback

Miami’s high-end condo market, on the other hand, is poised for something of a comeback in 2020, helped by President Trump’s tax overhaul, which capped federal deductions on state and local taxes, according to Knight Frank.

While South Americans pulled away in recent years as the strengthening dollar added to the cost of buying in the U.S., domestic buyers are making up for it: Florida, which has no income tax, is drawing wealthy buyers from high-tax states like New York and New Jersey. Those buyers will push up Miami high-end prices by five per cent in 2020, Knight Frank says.

Los Angeles’ market, from Beverly Hills to Bel Air, will show moderate price increases in 2020—amounting to about two per cent. It might have been higher but for a pullback of foreign buyers, particularly Chinese who face restrictions on moving money abroad. That’s tended to weaken the highest end of the market.

California’s wildfires, including one in 2018 that tore through Malibu, have also hurt by pushing up the cost of insurance, according to Sotheby’s White. Demand has been particularly weak for properties above US$10 million. Homes priced below US$10 million have a more bullish outlook, according to Knight Frank.

“L.A., at present, is more of a domestic market,” White says.

And Central London will have modest success across the board

Central London, where prices fell three per cent in the 12 months through November, will stabilize slightly next year as the fate of Brexit becomes clearer, says Tom Bill, Knight Frank’s head of London residential research. Prices are likely to rise by about one per cent next year, according to Knight Frank research, now that Conservatives have won in a landslide.

“Once the Brexit deal is completed, we forecast rising momentum across all markets, with price growth reflecting this from 2021 onwards,” the company’s 2020 forecast report says.

The ratio of shoppers to available listings reached a decade high in September, a sign of rising demand. The decline in the British pound combined with years of decreases in property prices are attracting foreign buyers again, Bill says. “Next year we could see the disorderly Brexit risk recede,” he says. “If that is the case, there’s an awful lot of pent-up capital ready to buy in London, and that will translate into higher levels of activity.”